An unprecedented look into official FAA documents and emails provide no conclusive answer to the Colorado Drone Mystery. A partially redacted email does show that DJI offered to use their DJI Aeroscope equipment at no cost to help determine if any DJI drones were flying in the Colorado skies. The case for Remote ID for drones was also made during this time. Here are some of the highlights, however, if you have time I would encourage you to read the entire article.

In a very lengthy and detailed article for The Drive, Brett Tingley writes that:

Now, The War Zone can offer an unprecedented inside look at what was going on behind the scenes within the FAA, which was leading a task force to solve the drone mystery. Not only is the confusion within the agency made clear, but we now have multiple highly credible official reports from trained observers from the timeframe when the objects were present in the region. Many of them match to a remarkable degree and they allude to a unique arrangement in which a large drone seems to have been accompanied by a fleet of smaller ones. We also have the latest conclusions, or lack thereof, of what the FAA thinks actually was happening over those peculiar weeks last winter.

The early January talking-point memo prepared for Administrator Dickson concluded, “If they are UAS, this is an exemplar of why Remote Identification requirements, such as those put forward in the FAA’s recently released Notice of Proposed Rulemaking, are critical to safety and security of UAS integration into the National Airspace System.”

In a Jan. 10, 2020 email from Joshua Holtzman, Acting Deputy Associate Administrator for the FAA’s Office of Security and Hazardous Materials Safety, to a redacted email in Nebraska, he states that private drone firm DJI had just offered to send mobile devices to the field to try to identify the mystery drones. Holzman said he had also connected DJI with the Colorado Information Analysis Center.

Note that the FAA tried to redact the name of the firm wherever it appeared, but overlooked the banner subject line in this email. 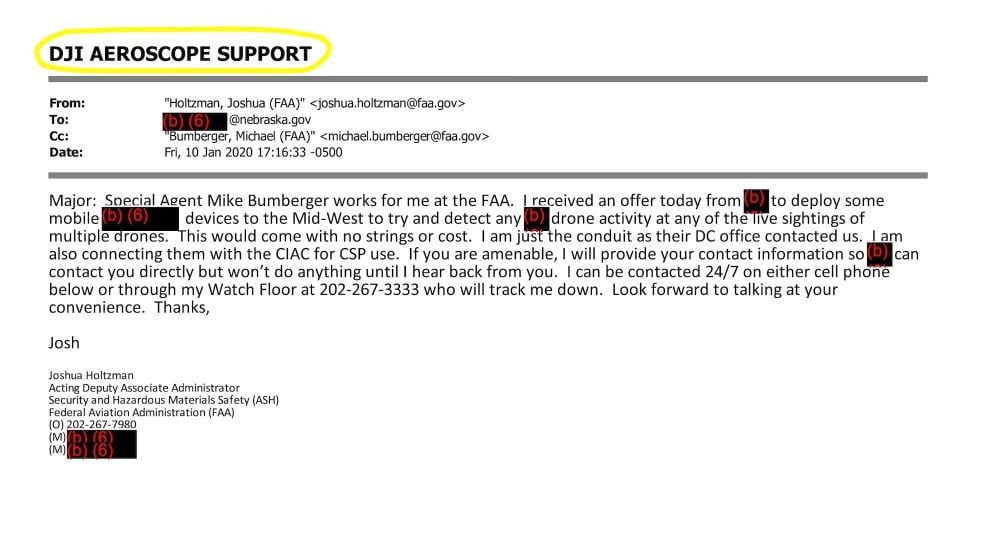 So, although The War Zone and the SCU have pursued the Colorado drone flap for over half a year, we still don’t know who was behind the mysterious activity, and from what we’ve seen so far, no one in the Federal Aviation Administration knows either. It’s clear from these FOIA releases that the FAA, state and local authorities in Colorado, and even the AFOSI, took the sightings quite seriously, but it appears that their attention quickly shifted elsewhere once the public reports stopped.

They offer detailed and consistent descriptions from trained observers indicating that some kind of relatively advanced UAS operation was indeed underway over the central United States for a period of weeks last winter.

However, for a period of time around Christmas and New Years, something truly unexplained was happening over the Colorado Plains. So unexplained that the federal government’s own agency tasked with regulating the skies over the United States still has no clue what exactly took place or who was behind it.

And so Colorado Drone Mystery remains a mystery. You can read the entire article here.