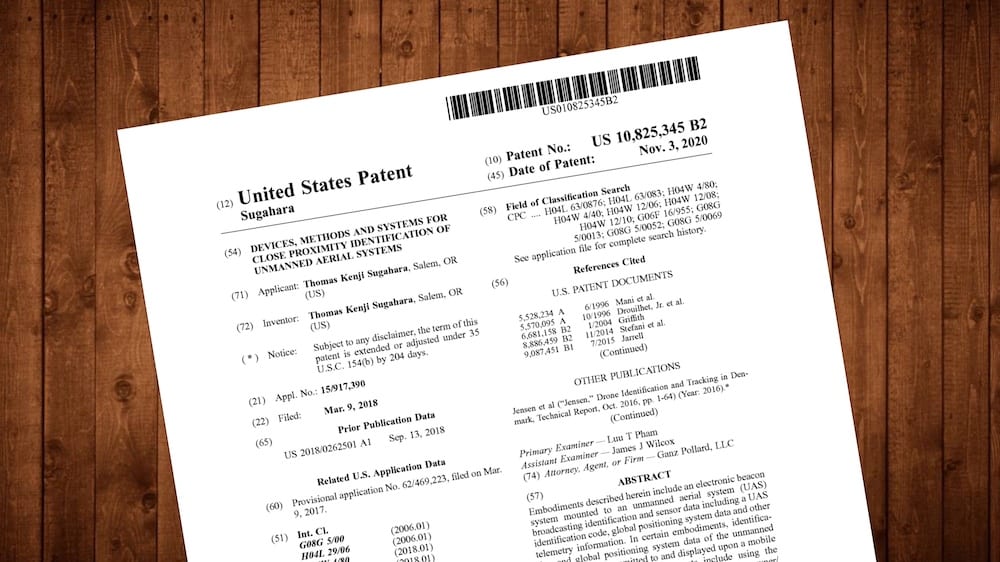 We have just learned that the United States Patent Office awarded what seems to the first Remote ID for Drones patent to Kenji Sugahara CEO and founder of AriAscend, an Oregon-based UAS research, and development company.

Update: uAvionix was awarded a patent earlier, but Sugahara’s has priority over it by 22 days.

In a press release from today, Kenji Sugahara, a drone industry veteran and founder of AriAscend explains that he has been awarded a patent for broadcast remote identification of drones from the United States Patent Office (USPTO).

The Federal Aviation Administration (FAA) recently announced the final rule for Remote ID for Drones that will required drones to broadcast telemetry and identifying information through Bluetooth and WiFi.

The United States Patent Office issued U.S. Patent 10,825,345, titled “Devices, methods, and systems for close proximity identification of unmanned aerial systems” on November 3, 2020, with priority to March 9, 2017. The “digital license plate” system described in our proposal and in the patent served as the foundation and was the genesis of the framework for Remote ID as described in the FAA final rule, states the release.

“I am honored that the whitepaper that I had brought to the FAA Remote ID ARC planted the seed for what we see today in the FAA’s final rule,” said Kenji Sugahara, CEO of Ariascend. “It is the reflection of our vision, perseverance, and hard work. While Remote ID will evolve over time, broadcast will remain the cornerstone of remote identification for the near future.”

Kenji Sugahara has worked closely together with the FAA and played an important role on the 2017 FAA Remote ID and Tracking Aviation Rulemaking Committee and serves on the Federal Drone Advisory Committee (DAC). Recently he launched the Drone Service Provider Alliance with drone industry proponent, Vic Moss.

Let us know in the comments below what you think of this apparently first Remote ID for Drones patent.