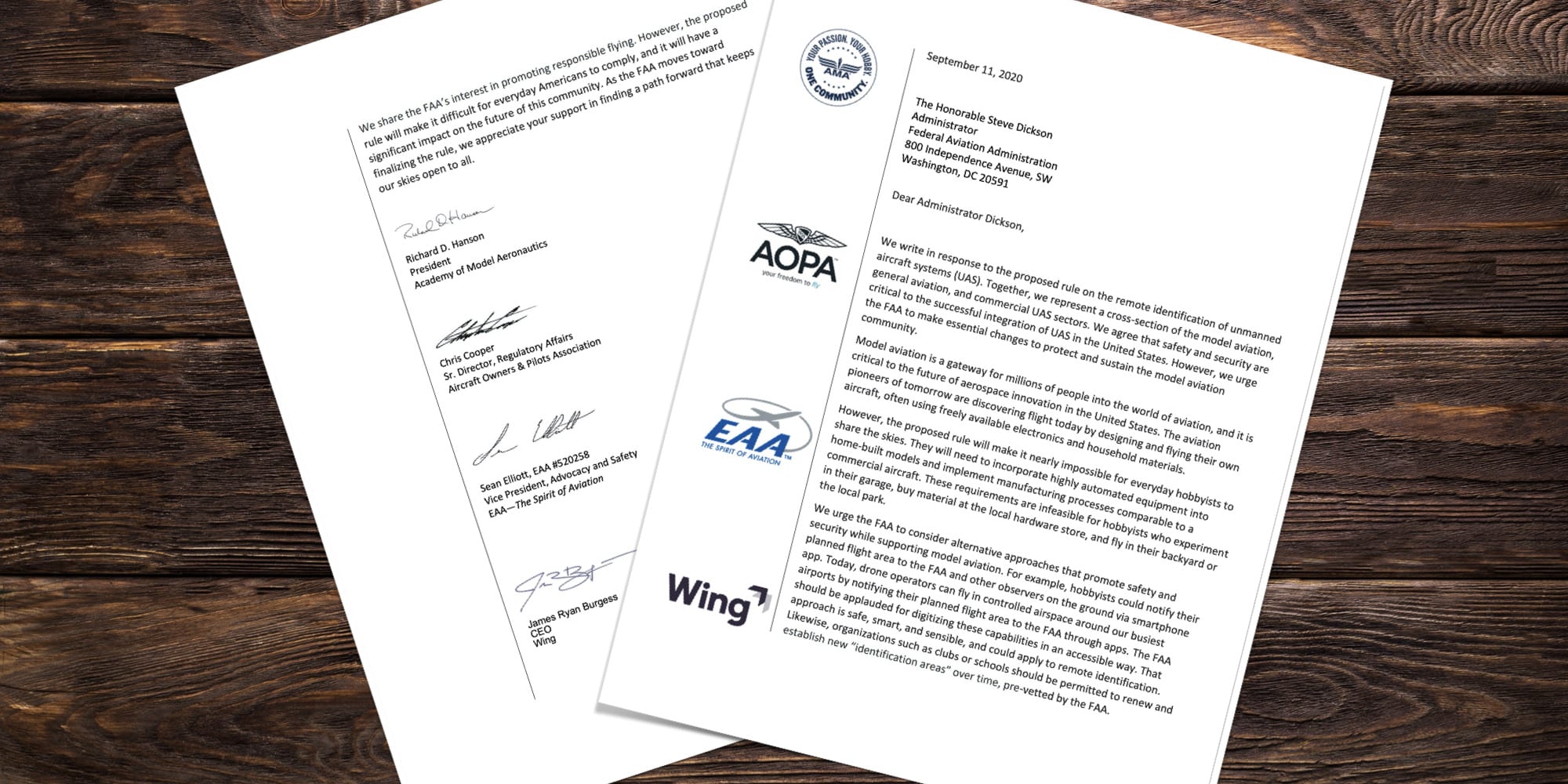 The AMA, AOPA, EAA, and Wing represent a cross-section of the model aviation, general aviation, and commercial UAS sectors, according to the AMA, are concerned that the proposed rule for Remote ID for UAS is ‘too difficult for everyday hobbyists to comply and alternatives are needed.’ Together these parties urge the FAA to ‘make essential changes to protect and sustain the model aviation industry.’

The letter continues to say that Remote ID makes it ‘nearly impossible for everyday hobbyists to share the skies,’ and will limit model aviation as a gateway for millions of people to enter the world of aviation.

“They will need to incorporate highly automated equipment into home-built models and implement manufacturing processes comparable to a commercial aircraft. These requirements are infeasible for hobbyists who experiment in their garage, buy material at the local hardware store, and fly in their backyard or the local park,” the letter reads.

The letter focusses on a number of critical issues in the proposed Remote ID rules:

The letter ends with expressing a shared concern about responsible flying, but also warns that the proposed Remote ID rules will make it hard for hobbyists to comply and will put the future of the model aircraft community at risk.

“We share the FAA’s interest in promoting responsible flying. However, the proposed rule will make it difficult for everyday Americans to comply, and it will have a significant impact on the future of this community. As the FAA moves toward finalizing the rule, we appreciate your support in finding a path forward that keeps our skies open to all.”

As you will probably already know, DroneXl is in favor of safe and responsible drone flying and also in supports Remote ID for drones. However, we do NOT support the proposed rules for Remote ID as they are currently suggested by the FAA. In short, the rules are overly restrictive, too expensive, and other, better solutions are available. Some people even likened the new rules to a ‘giant middle finger to aviation hobbyists.’ I wrote extensively about this when I still worked for another online drone news publication.

DroneXL supports the letter sent to the FAA by the AMA, AOPA, EAA, and Wing, although it is clearly written for the model aircraft hobbyists and less so in support of the drone hobbyist or FPV drone pilots. Unfortunately, the drone community still lacks one unified, powerful voice that would enable us to join this conversation in a more formal way.

The FAA has said that it aims to finalize the rules for Remote ID before the end of this year. It seems that this is mainly to support large corporations that are working on making drone deliveries a reality as soon as possible. Some of these companies include; UPS, Amazon, s well as Wing. They are all testing various delivery services by drone as we speak, for instance at Griffiss Airport in NY.

The FAA’s rush to finalize the Remote ID rules is what concerns DroneXL and clearly also the writers of this letter. When the FAA opened Remote ID for comments from the general public earlier this year, the agency received over 53,000 comments. Many of these comments were well-thought-out, multipage documents from experienced drone pilots, expressing valid concerns. However, the FAA was somehow able to very quickly work through all these thousands and thousands of comments and has kept pushing forward to finalize the Remote ID rules. In doing so the FAA has left us wondering f the agency really listened to the concerns of drone operators and model aircraft pilots. It seems that this feeling of not-being-heard has led the AMA, AOPA, EAA, and Wing to write this letter to the FAA now. We can only hope that the FAA will read and listen, not just to this letter but also to the 53,000 comments they received earlier.

The letter already hints to what may happen if the FAA doesn’t listen by saying that the ‘proposed rule will make it difficult for everyday Americans to comply,’ implying that some pilots may choose to not follow the rules. Non-compliance from hobbyist drone operators and model aircraft pilots will not help to make our skies safer at all. You’d hope that the FAA understands that as well.

END_OF_DOCUMENT_TOKEN_TO_BE_REPLACED

Russ from 51 Drones released a great video with seven tips that you can do to avoid the wrath of the Federal Aviation Administration (FAA), as some drone pilots are experiencing.