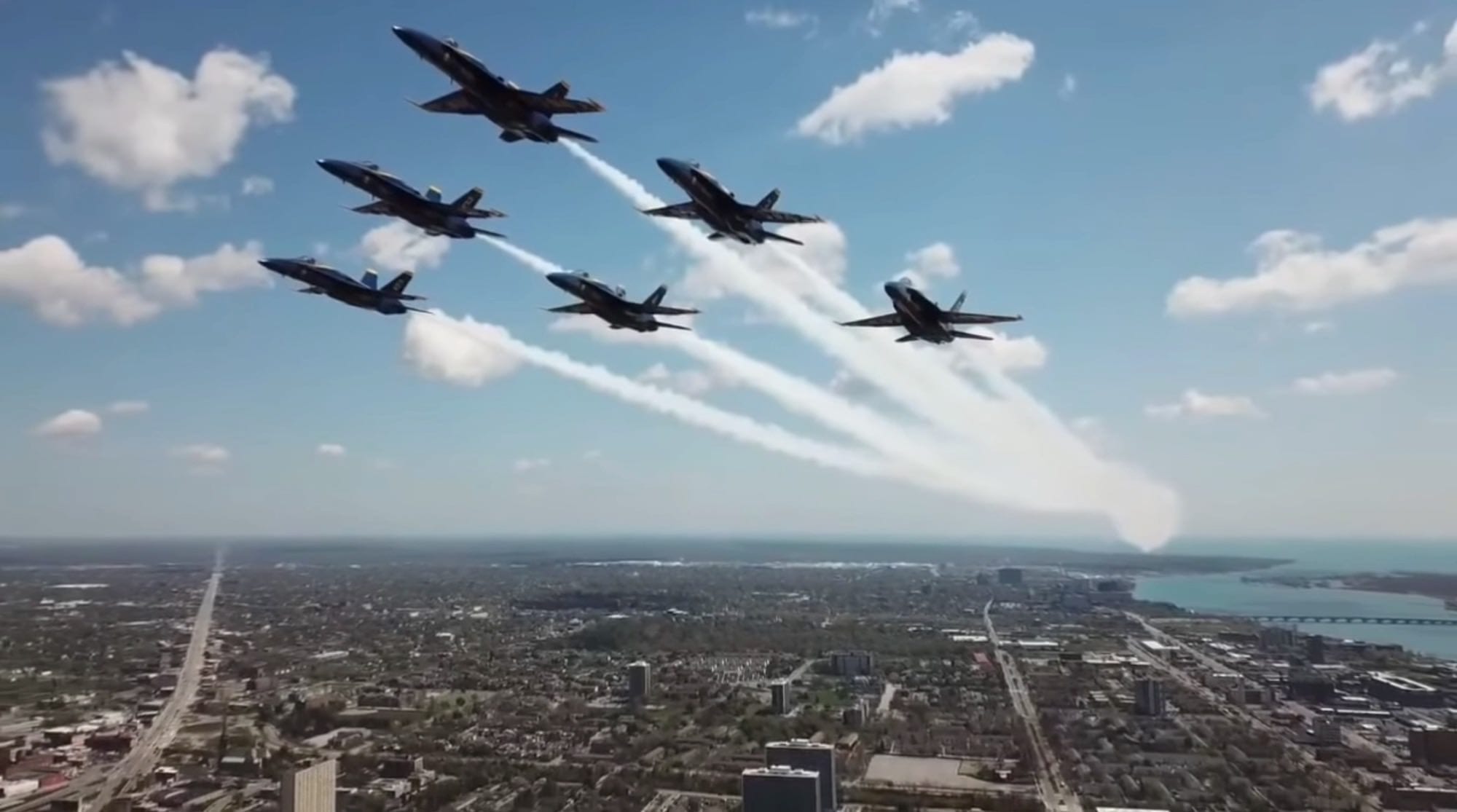 The video started to appear on social media after it was first posted on Youtube. The footage has since been removed but has been reposted by Vic Moss.

The drone footage shows the six F/A-18 Hornets, that form the Blue Angels flying, straight towards the drone. It is hard to judge exactly how far away the manned aircraft are from the drone, but as you can see in the video it is way too close. Way too close.

As the Aviationist rightly pointed out, the Federal Aviation Administration (FAA) defined a number of rules for safe and responsible drone flying. One of them states: “Do not operate your drone in a careless or reckless manner.” Another rule is that as a drone pilot you “give way to and do not interfere with manned aircraft.” At least both of these rules seem to have been broken in this video of the Blue Angels.

On Youtube, Vic Moss writes about the Blue Angels drone incident that:

This is not my video. I download it from Mr. Lucia’s FB page before he took it down. This is the link that many have sent to different government agencies. Mr. Lucia has since removed his entire FB page. One of the most irresponsible, ignorant, reckless, moronic, outright dangerous things I’ve EVER seen with a drone.

I would agree 100% with Moss’ statement. We will follow this story to see if the FAA will investigate this near-collision and what actions will be taken toward the pilot in control.

If you would like to learn how to fly safe and responsible and master your skills as a drone pilot, I recommend taking a look at the training course offered by The Drone U.

Press organizations and photographers are challenging a Texas’ drone law, the “Use of Unmanned Aircraft,” claiming that it violates the First Amendment. Last Monday the suit survived a motion, that was filed by state officials to dismiss it.

END_OF_DOCUMENT_TOKEN_TO_BE_REPLACED

Will there be a new BetaFPV drone with Insta360 camera coming in December? This teaser video that was shown on Facebook would make you think so.

END_OF_DOCUMENT_TOKEN_TO_BE_REPLACED

The European aviation safety organization EASA is organizing two webinars on 9 and 10 December on European drone regulations, which will take effect on 31 December. This is an interesting fact, as EASA is the driving force behind the new regulation. The information comes directly from the source. The first webinar is aimed at recreational drone pilots, the second is aimed at professionals.