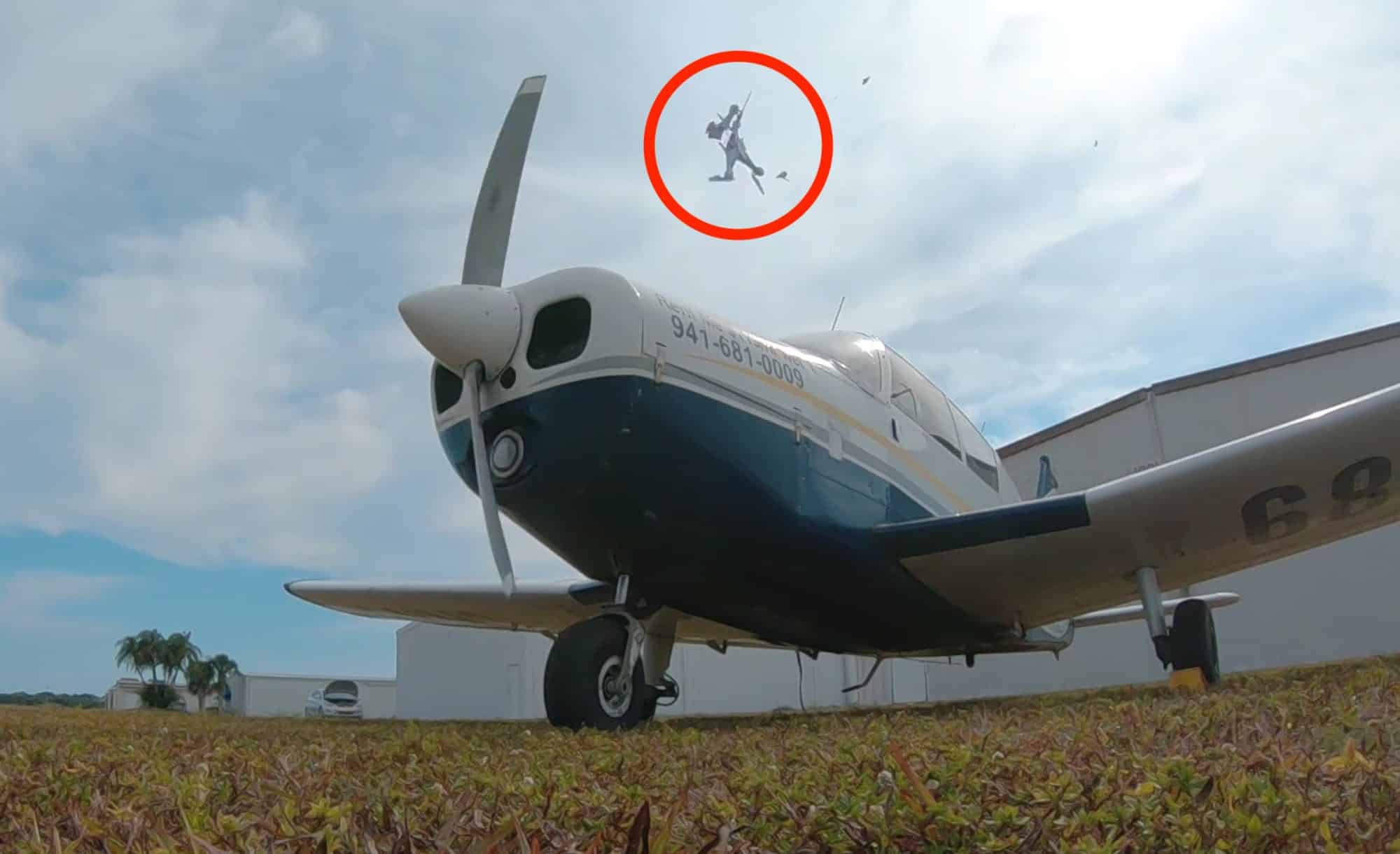 Drone strike. What happens when a drone strikes the propeller of an airplane? Well, not that much really as you can see in this Youtube video where Jon Kotwicki flies a cheap Amazon drone into the spinning propeller of his airplane. The video was made as part of their ‘destroy an airplane series’ on Youtube and is definitely worth watching for any drone pilot.

Fyi: as of January 1st, 2020 DJI includes AirSense (ADS-B In) in all their new drones that weigh more than 250 grams, so that when a manned aircraft comes in the area where you are flying your drone you will get a warning.

Drone strike. What happens when you fly a drone into an airplane propeller?

Granted this was not the heaviest drone they could have used in making of this video. It would have been interesting, and a lot more expensive, to fly a DJI Phantom 4 or Mavic 2 into the spinning propeller. Maybe Jon can fly an old Phantom 2 or 3 into the prop in another episode? Furthermore, the airplane was not airborne, so you’re missing the forward speed from the airplane in this video. However, having said all that, it is good to see that a fast spinning prop incurs hardly any damage at all when it hits a drone. According to Jon, it is unlikely to hit a drone, to begin with, and the chance of significant damage to the manned aircraft in his opinion is small.

Here’ what Jon had to say in the video:

We will be flying this drone into the propeller while it’s running because well, we want to know with all these drones flying out in the national airspace system, how safe is it? What really is going to happen if a drone hits your airplane? And, obviously this is a smaller drone. This is common for what they sell on Amazon. What’s easy for people to get their hands on.

The bigger drones they might be more concerned about, well those have GPS in them that keep them away from airports and they’re very expensive thousands and thousands of dollars. And those people that spend thousands and thousands of dollars on drones don’t really have an interest in their very expensive investment impacting an aircraft. And they’re often educated and how to fly their equipment and they keep it away from us pilots. But for the average kid on Amazon. He doesn’t really know if he lives near an airport or there’s airplanes nearby and he could easily fly this into you so what kind of damage is it going to do to your propeller?

So the aftermath of a drone flying through a propeller. Well, it’s [the drone] a pretty chewed up. And the worst part about drones probably the most concerning part is the battery. So when this guy obviously, this is a very small battery. This very dense lithium-ion battery makes contact with the propeller or tries to come through your windscreen. That’s probably the most dense part of the drone aside from the motors. The motors are fairly small though, so what kind of damage did they do to the propeller? Well, looking closely as we come up here and take a look. Really, nothing. There’s no other damage here, this was previous damage for me smacking the crap out of it with the big chunk of cast iron from a previous episode. In case you guys missed that one. That was a lot of fun. But the drone went right through the tip of the blade no damage out here. No damage on the other tip the blade here. So really is a drone going to damage your aircraft? Well, it’s not going to be good for it. It’s probably going to leave a dent, right? We’ve seen some of those other videos of drones impacting wings, where they fired a fairly heavy drone at like two to three hundred miles per hour into a wing. We simply don’t go that fast and neither do these drones.

In all reality, the little drones that we really risk encountering around our airports from unsuspecting drone flyers, drone pilots. People that just don’t know the rules and don’t know to stay away from our aircraft. Well, it’s a fairly low threat even as there’s millions and millions of drones. Far more drones than aircraft flying out there. Fairly low threat. As far as the bigger heavier drones like this Mavic that has a much heavier battery this battery right here powers this guy. And slightly bigger motors. Well is this gonna do a little bit more damage? Probably not much the propeller from what we’ve seen and everything we’ve thrown at this propeller so far. It’s not gonna be great, it might bend it might ding it. Is it gonna take you out of the sky engine and propeller wise? Probably not. Is it gonna come through your windscreen? Possibly. But again, maybe not It’s going to break up as a ghost through the propeller If it hits your wing is gonna leave a dent. I’m sure it will. Is it gonna take out your airplane and make you follow the sky again probably not. Probably the biggest hazard here is a pilot impacting a drone freaking out mishandling the situation and having a bad outcome from a mishandling the situation, rather than just staying calm and saying, hey airplane’s still flying let’s head to the nearest airport take a look at this and then let’s find that little kid flying that drone and go have a little chat with them because he wasn’t supposed to be doing that.

The guys that are flying these things professionally are not the problem. The professional drone industry that’s selling drones for several thousands of dollars big heavy drones that are scary to us. Not really that big a deal. Is Amazon’s drones really gonna be a problem for us pilots? Probably not anywhere in the near future. Ultimately the biggest concern that I have is December 26th. The day after Christmas. Everybody goes out. They get their kids drones and they start flying around. Not knowing they need to stay below 400 feet. Not knowing that they can’t be near airports. Some of these small light Amazon drones, I’ve seen up at a thousand feet. 1,500 feet, because they get sucked up in thermals.

And they just kind of fly away. They sort of auto-rotate as they’re descending through the thermal but they still get picked up. And the user loses track of the drone and it’s gone. And it’s a hazard for us but is it any more of a hazard than a bird? Probably not in our slower 100 miles, 150 miles per hour GA airplanes. Things that go faster than that Will. It’s really gonna make a little bit of a bigger difference, but typically those faster aircraft are operating at much higher altitudes where real professional commercial drone users are not operating in those little tiny drones typically don’t get up there either. If they really don’t have the battery life for the ability to get up there So is it a hazard to us? You can make up your own mind. Obviously a lot of people have a lot of opinions on this but for us no damage to the propeller and no I’m not going to put a $2,000 drone through the propeller because that’s way too much money.

What do you think after seeing this video? Do you agree with Jon’s statement that drones are of little risk for smaller manned aircraft even when they hit the propeller? Let us know what you think in the comments below.