The world’s largest drone maker is venturing into a different industry with the announcement of DJI Automotive, a new division that will leverage DJI’s obstacle avoidance and LiDAR technology. The new division will be unveiled during the Shanghai Auto Show next week.

While the announcement of DJI Automotive may come as a surprise to many, it is not the first time we have heard about it. Back in January of this year, we first reported about DJI developing self-driving capabilities with LiDAR technology.

According to Peng’s article, DJI’s founder Frank Wang has always viewed the company not solely as a drone maker but as a ‘smart robot company.’

To develop the DJI Automotive technology, DJI has brought in Shen Shaojie, head of the Hong Kong University of Science and Technology-DJI Innovation Joint Laboratory and who now is the DJI Vehicles Leader.

Over the last years, DJI has been improving the obstacle avoidance capabilities of its drones and introduced small and affordable LiDAR systems through its subsidiary LIVOX.

There is no reason, DJI would limit the application of its obstacle avoidance capabilities merely to drones and it seems that with the Shanghai Auto Show next week, we will learn more about the ambitions of DJI to venture into the automotive industry.

In the announcement below, DJI says DJI Automotive, join us at the April 19 through 28 Shanghai Auto Show National Convention and Exhibition at Booth 22-68E061.

The graphics on the announcement seem to indicate the various DJI hardware components and sensors placed on a vehicle to will make autonomous driving possible.

What do you think about DJI leveraging its obstacle avoidance and LiDAR technology for new applications such as autonomous driving? Let us know in the comments below.

Hat tip to Kanzhaji for first reporting about DJI Automotive. 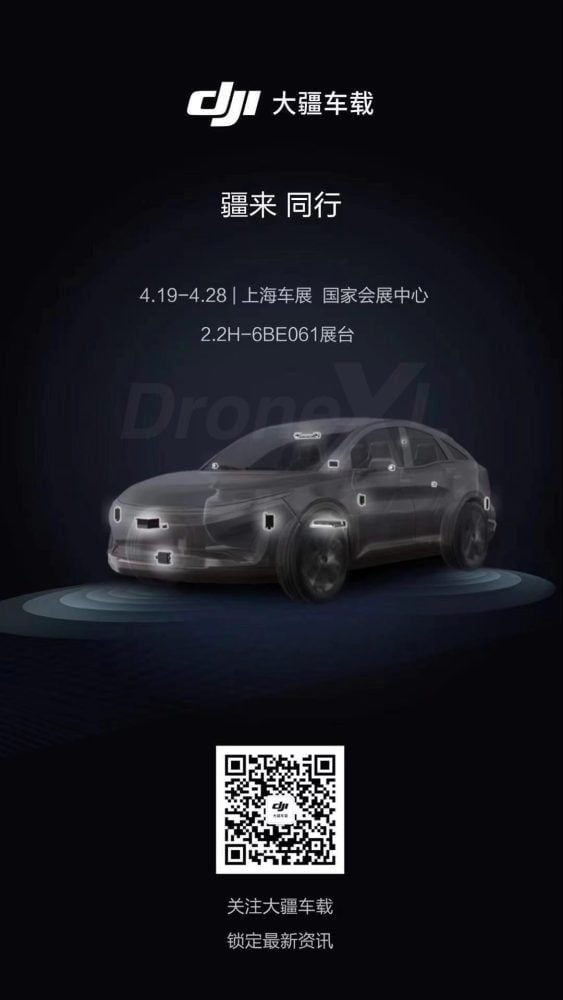