In the future, we will increasingly see that drones perform certain missions completely independently, such as routine inspection flights or ad hoc missions during calamities. But that can only take place safely if the drone is able to independently detect and avoid static and moving obstacles in varying conditions. For this reason, the Directorate-General for Public Works, part of the Ministry of Infrastructure and Water Management of the Netherlands, asked a number of companies to come up with innovative solutions.

Under the name Drone2go, The Directorate-General for Public Works is working with a number of other government agencies on a network of autonomous drone boxes. The goal is to install a number of base stations throughout the Netherlands, from which drones can autonomously come into action, for example, to check the situation in the event of a calamity, or to conduct control and inspection flights.

To achieve that goal, it is essential that the flights are carried out safely, especially since there is no pilot on-site to intervene when an unexpected situation arises. Consider, for example, avoiding a known obstacle (such as a building, tree, or a high-voltage line), or an unexpected obstacle, such as a crane that is temporarily set up.

Ideally, the drones should be able to independently detect obstacles and maintain an alternative flight path. But it goes further than that: in addition to obstacles, drones also have to avoid other moving obstacles, such as a trauma helicopter that appears unexpectedly.

Nowadays commercially available drones are often already able to avoid static objects. The point is that this function does not always work, for example when the drone is used to perform a waypoint mission. And that is precisely one of the desired options, to enable a drone to independently travel a pre-programmed route.

Another problem is that the basic detection systems are not always reliable. For example, because insufficient light is available for visual obstacle avoidance systems to work, as is the case with the Skydio 2 drone that cannot fly at night. Or because the detection system cannot distinguish fine-meshed objects, such as tree branches or wires. In such circumstances, there is a need for another “sense & avoid” approach. For example, by using a laser scanner.

When it comes to detecting and avoiding other moving obstacles such as air traffic, things become even harder. Although there are drones on the market that can warn against other air traffic on the basis of ADS-B, unfortunately not all aircraft are equipped with an ADS-B ‘out’ transponder.

In order to make progress when it comes to the use of autonomous drones, the subject “sense & avoid” was taken as the starting point for one of the sub-projects within the Drone2Go project. Various companies have been asked to come up with innovative solutions when it comes to detecting (temporary) obstacles.

A number of these solutions were presented during the opening of the Drone2Go test area in the Netherlands. The need to be able to experiment in practice became apparent during various demonstrations: the drone from one of the consortia had great difficulty in passing a container flawlessly, a drone from another consortium did not want to start the intended waypoint mission.

Not only are there different technical ideas about how “sense & avoid” could work. Part of the solution is to prevent the drone from encountering obstacles at all, says Bart Slinger of Mapture.ai.

“You can actually absorb a lot by pre-programming obstacles and zones. We see the DJI obstacle avoidance as a kind of last resort because it does not detect everything. Even a Skydio cannot detect cables reliably. I am not sure whether you see cables with lidar or radar, but then you take a lot of extra weight with you and it is also not convenient. ”

It is remarkable that another consortium is actually using a laser scanner as a possible solution. For example, Mainblades and Deck180 have attached a lidar to a DJI industrial drone. In this case, a combination is made with pre-programmed knowledge of the environment: “The flight is planned taking into account a height map of the Netherlands. The lidar system will avoid unexpected obstacles and handle the optimal route on location.”

The consortium consisting of AirHub and DroneQ opts for obstacle detection based on existing hardware, in this case, the sensors on a DJI Mavic 2 Pro. But instead of relying on DJI’s software to handle the obstacle detection, it was decided to use a proprietary algorithm.

On Monday, President Trump signed an executive order that requires all U.S. agencies to assess the security risks of drones that are made in China, Iran, North Korea, or Russia that are present in any government drone fleet and to prioritize the removal of these unmanned aircraft if warranted.

END_OF_DOCUMENT_TOKEN_TO_BE_REPLACED 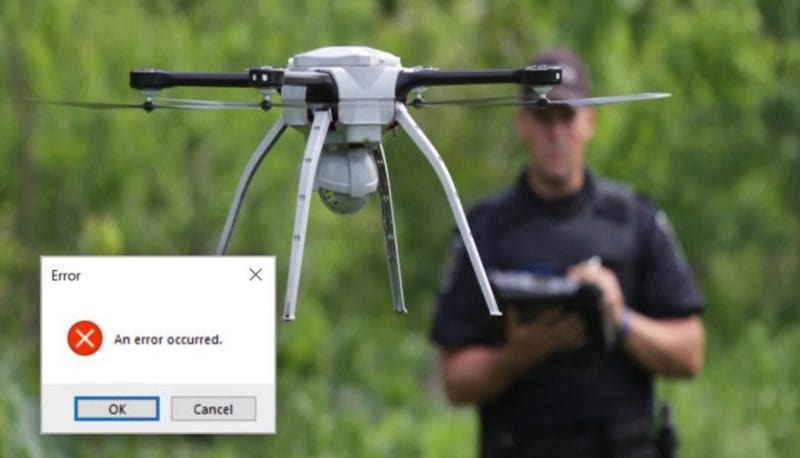 A press of the wrong button resulted in the crash of an $85,000 police drone in the United Kingdom. The ground station of the Aeryon SkyRanger R60 displayed an error message prior to the crash. The drone pilot wanted to dismiss the message but accidentally switched off the engines.