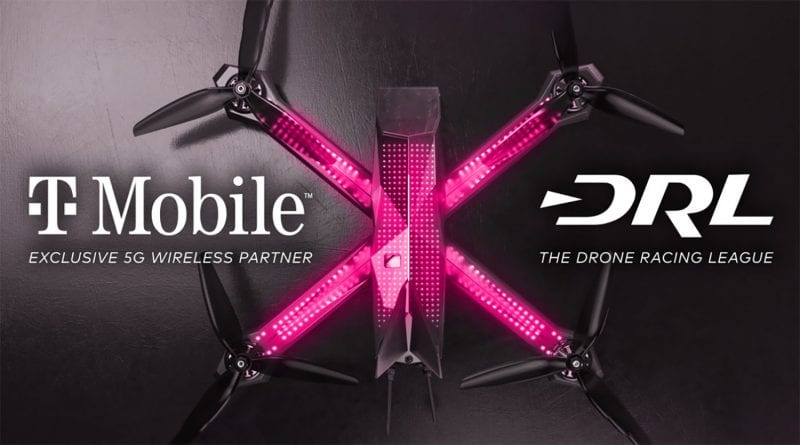 Telecom provider T-Mobile partnered with the Drone Racing League with the aim of streaming the live camera image from racing drones via 5G to millions of viewers during the 2021 DRL Allianz World Championship Season. The goal is to underscore what 5G is capable of. T-Mobile also wants to promote the adoption of 5G technology among potential user groups.

The announcement of the collaboration follows an investment from the T-Mobile Ventures fund in the Drone Racing League (DRL). As part of the collaboration, DRL will develop racing drones with 5G technology on board. These drones will then be deployed during the 2021 DRL Allianz World Championship Season.

DRL consists of the world’s best drone pilots who fly live and virtually through iconic locations around the world with their self-developed FPV racing drones. During the live events, the racing drones reach speeds of up to 140 km / h. The pilots watch the video feeds from the drones through their video glasses. These video feeds can be shared with millions of viewers thanks to T-Mobile’s 5G technology during live broadcasts on NBC, NBCSN, Twitter, and Facebook.

“We have invested in DRL to drive innovation in two large and growing markets – drones and technology-powered sports – and we can’t wait to boost both with T-Mobile 5G,” said Neville Ray, President of Technology at T-Mobile. “The fastest drones in the world and the largest 5G network in the country – that’s a fantastic combination!”

As part of the partnership, DRL will include T-Mobile in the 2021 DRL Allianz World Championship Season via commercials and display ads in the DRL SIM. T-Mobile also supports the DRL Academy, the competition’s education program, and creates educational programs around 5G and drones to inspire the next generation of technologists and digital athletes.

According to T-Mobile, the Ultra Capacity 5G network is able to achieve data speeds of 300 Mbps, with peaks of up to 1 Gbps. In addition to applications for drones, T-Mobile also provides possibilities in the field of industrial IoT, security and monitoring, first aid, and much more.