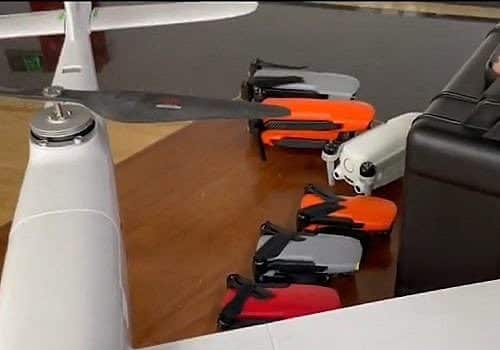 Earlier today we wrote about a new Autel Nano mini drone that showed up in two leaked photos. Now, we have received another photo that indicates that there will be two new Autel drones to compete with the DJI Air 2S and the DJI Mini 2.

The leaked photo below shows three Autel Nano mini drones in the foreground and three significantly larger drones (grey, orange, and white) in the background. The three unmanned aircraft in the back seem to be of a similar size as the DJI Air 2S.

The photo is of a very low resolution and really doesn’t provide us with a lot of detail. Both the Autel Nano mini drone and the new DJI Air 2S competitor feature the foldable design we know from the Autel EVO II. Overall the design of these new drones somewhat resembles the EVO II.

The white drone in the middle is slightly turned towards the camera and shows us the circular on/off switch that also indicates that the battery loads from the back. A little lower we see two circular openings that will likely be two obstacle avoidance sensors. It is rumored that the new Autel Nano mini drone will offer 3-way obstacle avoidance. It seems safe to say that the DJI Air 2S competitor from Autel will offer at least the same if not better.

While we have no information as of yet about any of the specs of these drones, the price, and their availability, the fact that these photos have been leaked is a strong indicator that we will likely see them before the year is over. Unless, Autel Robotics decides to hold out until CES 2022 that will be held in January in Las Vegas. We also expect Autel to be competitive on both price and spec compared to the DJI drones.

The drone on the left is the new EVTOL from Autel Robotics called the Dragonfish.

Expect more information to surface in the next few weeks as Autel tries to build up excitement for their new products.

What do you think about the new Autel Nano mini drone and the DJI Air 2S competitor? Let us know in the comments below.