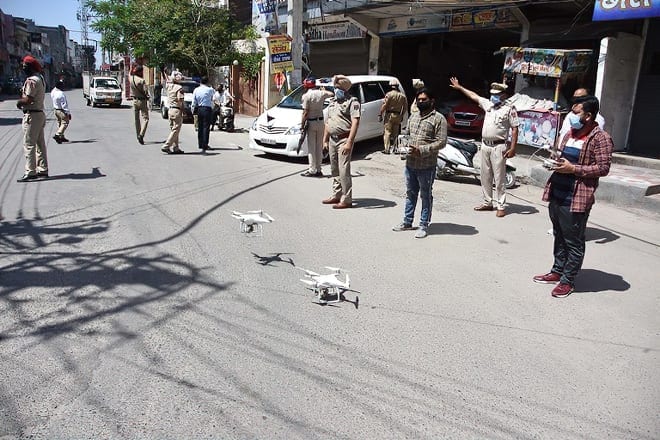 Within 24 hours after the surveillance drones were put into service in Jalandhar, India, 20 people had been arrested for violating curfew norms that were implemented to stop the Coronavirus from spreading. The unmanned aircraft have been used to enhance surveillance in the areas under the jurisdiction of the Jalandhar Commissionerate Police.

According to the Tribune India, Commissioner of Police Gurpreet Singh Bhullar on Saturday said: “an ultra-modern technology was being used for keeping an eye over the hotspots and vulnerable areas of the district.”

During the drone surveillance missions, police had identified a number of people violating the curfew norms. 12 First Information Reports were lodged against 20 people who were later arrested for breaking the curfew norms that have been put in place to stop the Coronavirus from spreading.

Jalandhar Deputy Commissioner Varinder Kumar Sharma and the Commissioner of Police, states that the use of the surveillance drones was aimed to ensure strict compliance of the curfew. They said that: “the curfew had been imposed for the betterment of people so that the COVID-19 virus could be stopped from spreading its tentacles.”

Reportedly, the drones that seem to be DJI Phantoms, can cover an area of 1.25 miles in all directions and could fly up to a height of around 600 feet.

In the nearby town of Ludhiana, surveillance drones have been put to use as well. Local police there has access to 15 drones outfitted with cameras. Reportedly, many people are not following the local police orders as one person commented online: “You can see people standing on street corners, [e]specially youngsters gossiping with each other. Some play cricket. People are sitting in groups on [the] streets all day.”

What do you think of the increased use of drones for surveillance purposes during the Coronavirus pandemic? Do you think this is justified under the current circumstances? Or do you feel that this is government overreach and that countries are slowly changing into police states? Let us know what you think in the comments below.

A great first in the worldwide fight against the coronavirus: in Ghana, a shipment of corona vaccines from AstraZeneca was delivered by Zipline drones to a remote village in the middle of the country in early March. The...