The police in San Pablo, a city north of Oakland, said that the drones are parts of a program that is now being accelerated by the department as social distancing guidelines limit police operations.

“This technology has exponentially grown in the past couple of years and it will exponentially grow over the next five to 10 years, especially in the environment we are in today — where having that physical police officer response isn’t always the best solution,” said police captain Brian Bubar according to the Financial Times.

Drones have been widely used in China to help fight the coronavirus outbreak. And even in a number of European Countries, we have seen local law-enforcement starting to deploy drones in larger numbers to enforce social distancing rules. However, in the United States, it appears that privacy concerns among the general public have caused officials to be more hesitant with the use of drones to fight the virus.

“We are trying to save lives, not be big brother,” the department tweeted in response. “If this plan saves one life, then it’s worth it.”

In San Pablo, two US-1 drones, made by Impossible Aerospace, were used in a homeless outreach program to communicate to homeless communities and offering them services and direction for help. Impossible Aerospace focusses on commercial and first responder customers with their US-1 drone that offers a flight time of around 90 minutes.

With the help of the drones from Impossible Aerospace, the San Pablo police department was able to broadcast information to the homeless community in English and Spanish, while keeping their officers at a safe distance. Both departments stressed that the drones for merely used to convey information, and not to patrol populations or conduct unrestricted surveillance.

“The last thing we’d want is for someone to view this as an enforcement tool,” Mr Bubar said.

While some people may not like the idea of Police Drones flying through the skies, Impossible Aerospace’s chief executive, Spencer Gore counters with saying:

“Imagine you wake up to the horrifying discovery that your child has gone missing,” said Impossible’s chief executive, Spencer Gore. “The police say, ‘We’ll send an officer around.’ Wouldn’t you way rather have an entire armada of drones in the sky blanketing the city with a search party?”

In Chula Vista near San Diego, police used drones in a three-hour-long homeless outreach operation over difficult terrain and dense foliage. During the mission, 26 homeless camps across eight square miles were covered. Police chief Roxana Kennedy said that it would have taken two days to complete that work without drones.

The DJI Mavic 2 Enterprise is used by the Chula Vista police department as part of DJI’s Disaster Relief Program. 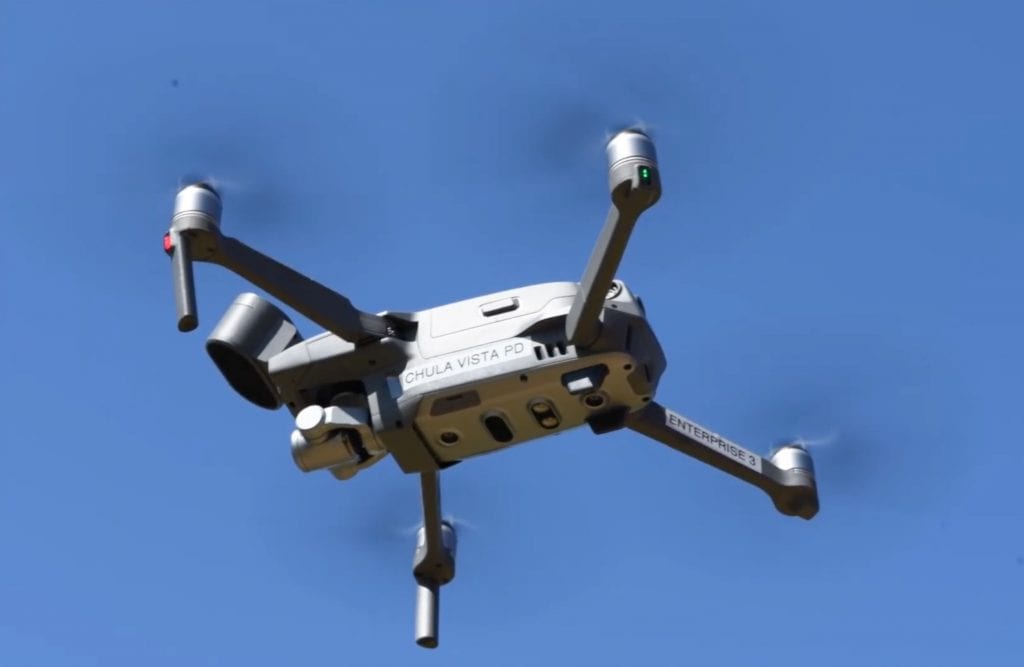 What do you think about police departments using drones to help in the fight against the coronavirus? Does it worry you that drones might become a staple in every police officer’s toolbox? Or do you see the drones as a great tool to keep more people safe? Let us know what you think in the comments below.