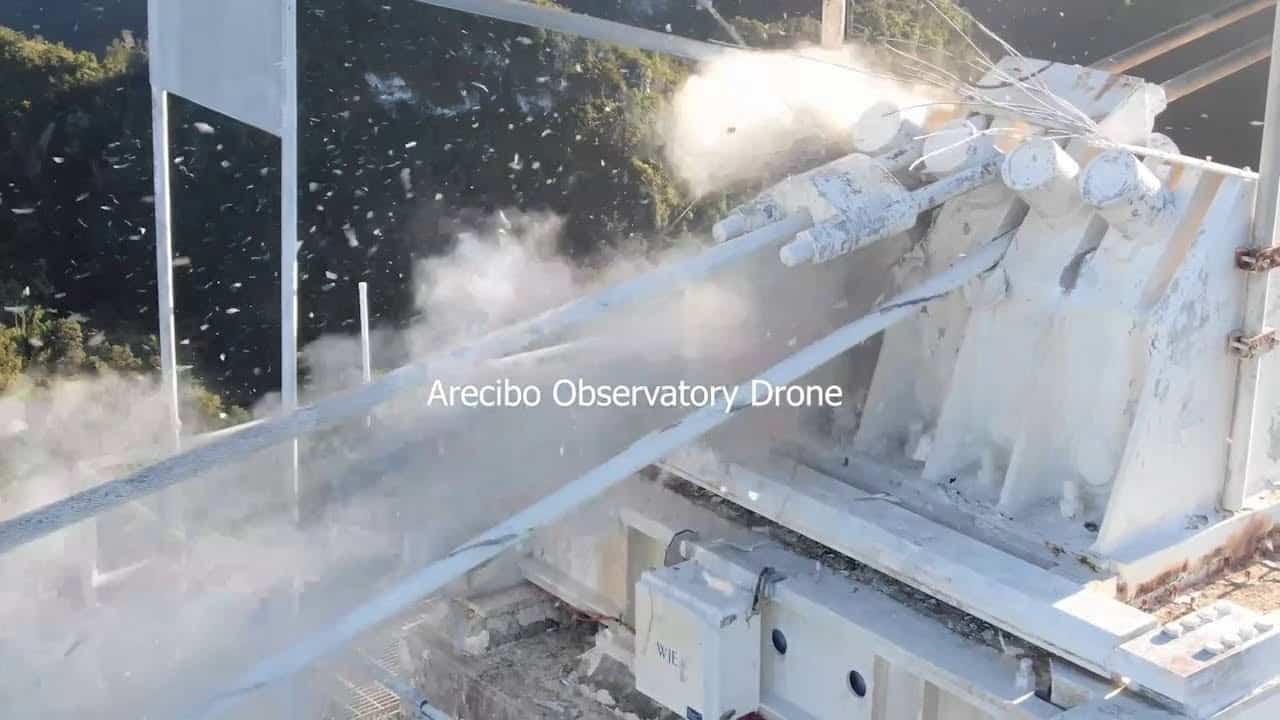 Spectacular drone footage of the collapse of Arecibo Observatory

The drone footage of the collapse of Arecibo Observatory was recorded on December 1 and shows the exact moment when one of the major cables breaks, resulting in the immense 900-ton structure falling on the observatory’s 1,000-foot wide dish below.

The destruction was captured by one of the Arecibo’s Operations control Center cameras, and also from a drone that was flying over one of the towers at the time the first cable broke and the structure started to collapse. As the cable snaps the drone pans to the left and shows the entire structure crashing down to earth.

Over the last couple of weeks, the Arecibo Observatory has been degrading rapidly and the NSF was conducting hourly monitoring sessions of the structure with drones.

“I think we were just lucky and the drone operator was very adept to see what was happening and be able to turn the camera,” Ashley Zauderer, the NSF program manager for Arecibo Observatory, said during a press conference.

In the drone video, you can see the first cable snapping, which caused the platform to swing out and crash on top of the massive dish below. The tops of the three towers to which the cables were attached to hold the platform in the air, were destroyed as well in the process.

“The cables that go from the top of Tower 4 to the platform — they’re very faint in the camera view but they’re there,” said John Abruzzo, a contractor at engineering consulting firm Thornton Tomasetti, hired by the University of Central Florida. “And so it’s those cables that fail near the tower top first, and then once those fail, the platform then loses stability and starts to come down,” Abruzzo said.

The collapse of the platform was not entirely unexpected as two other cables had failed already in August and November. Engineers concluded that there was no safe way to repair and restore the installation and that it would be unsafe for anybody to work on it.

After the collapse, the team of engineers is now working on a plan to clean up the site, do a full environmental assessment and judge the safety of the remaining parts of the Arecibo Observatory.

Replacing the installation is under consideration but it is not clear at this point if that will happen.

“With regards to replacement, NSF has a very well defined process for funding and constructing large scale infrastructure — including telescopes,” Ralph Gaume, director of NSF’s division of astronomical sciences, said. “It’s a multi-year process that involves congressional appropriations, and the assessment and needs of the scientific community. So it’s very early for us to comment on the replacement.”