A drone seemingly crashed into a bald eagles nest in a eucalyptus tree in Adenwood Historic Park in Fremont, California. According to park officials, the birds have left the nest at least temporarily.

The eagles may return again soon as a Bay Area News Group photographer witnessed one of them returning to the nest for a brief visit on Tuesday afternoon.

The alleged drone crash is under investigation by officials of the East Bay Regional Park District and the California Department of Fish and Wildlife.

Authorities from the East Bay Regional Park District and the U.S. Fish and Wildlife Service, as well as the California Department of Fish and Wildlife, are investigating the drone incident and trying to determine whether there was an eaglet in the nest when the drone crashed and if so whether it was killed or injured, park district spokesperson Dave Mason said according to the Mercury News.

“It appears the drone crashed into the nest,” Mason said, noting that parts of the device were found in the nest. 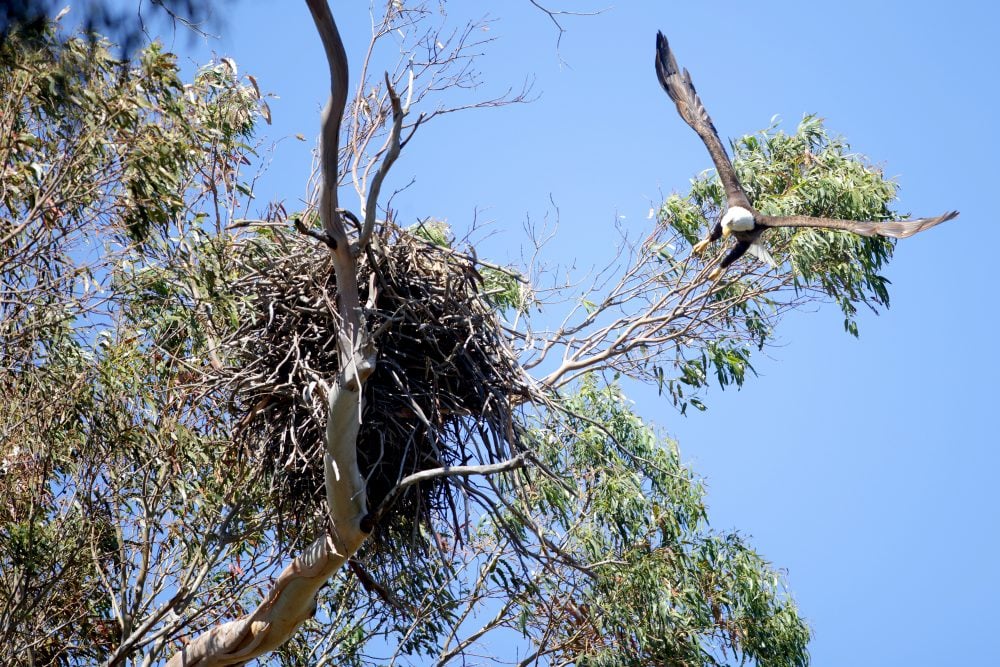 Park officials were informed of the drone crash on Monday. Exactly when the crash happened and who is responsible is unclear at this point in time.

“We understand this is upsetting to the community. It’s upsetting to the district as well, as stewards of the environment and wildlife,” Mason said “They may have abandoned the nest, but obviously we’re investigating the situation to see what has actually taken place in that nest high up in the tree. Only time will tell if they come back, once the drone is removed,” Mason said.

The district spokesperson pointed out that, “Drones are not allowed in (East Bay Regional Park District) parks for many reasons, including disturbing or potentially harming wildlife. This is a potentially very sad example.”

While they are not endangered, Bald eagles are a protected species under multiple federal laws, including the Bald and Golden Eagle Protection Act.

According to the law, bald eagles are not to be molested or disturbed. Violations can result in civil and criminal penalties, according to the U.S. Fish and Wildlife Service.

Elite space program will include a St. Louis drone startup