This morning, the Mavic 3 specs were leaked on Chinese social media and shared online. Here’s the latest on the DJI drone that will almost certainly be released on November 5th, 2021.

Update: Here are the rumored prices for mainland China. Yikes.

DJI, the world’s largest drone maker, is expected to release three versions of a prosumer drone, the Mavic 3, the Mavic 3 Fly More Combo, and the Mavic 3 Cine Combo.

In addition to all the leaked Mavic 3 photos we reported on yesterday, we know received a lot of the specs on the yet-to-be-released DJI drone.

As the primary sensor, the DJI Mavic 3 (and Fly More), and DJI Mavic 3 Cine each include a 20-megapixel camera created in collaboration with the Swedish specialist Hasselblad. The camera uses a large 4/3 “CMOS sensor and an aperture of f/2.8 – f/11, and an 84-degree field of view or 24mm. ProRes capability is optional. The max resolution of the images is 5280×3956 pixels. The DJI Mavic 3 features Automatic Exposure Bracketing (AEB) and the option for time-lapses.

The DJI Mavic 3’s Hasselblad camera in the “Cine” edition, can record video in the Apple ProRes 422 HQ format, which is the most significant distinction from the standard Mavic 3 drone.

In addition to the primary camera, DJI includes a secondary camera. According to the spec sheet, the zoom camera has a resolution of 12 megapixels, a field of vision of 15 degrees (162mm), and an aperture of f/4.4. This secondary camera can record 4K video at 30 fps, but without ProRes support.

The standard DJI Mavic 3 drone features 8GB of internal memory, whereas the Mavic 3 Cine has 1TB of internal storage. MicroSD cards of up to 2TB are supported on both Mavic 3 versions.

The 5000mAh battery allows for up to 46 minutes of flight time. The Mavic 3 weighs 900 grams and can reach an altitude of around 4 miles and a maximum flight distance of about 20 miles, but a transmission range of 10 miles according to the Mavic 3 specs leaked by WinFuture. The Mavic 3 uses OcuSync 3+ or O3+ as it is called now. However, elsewhere in the specs sheets Ocusync 2.0 is mentioned for the DJI RC-N1 Remote Controller. We trying to get clarification on this.

Let us know what you think about these DJI Mavic 3 specs in the comments below. 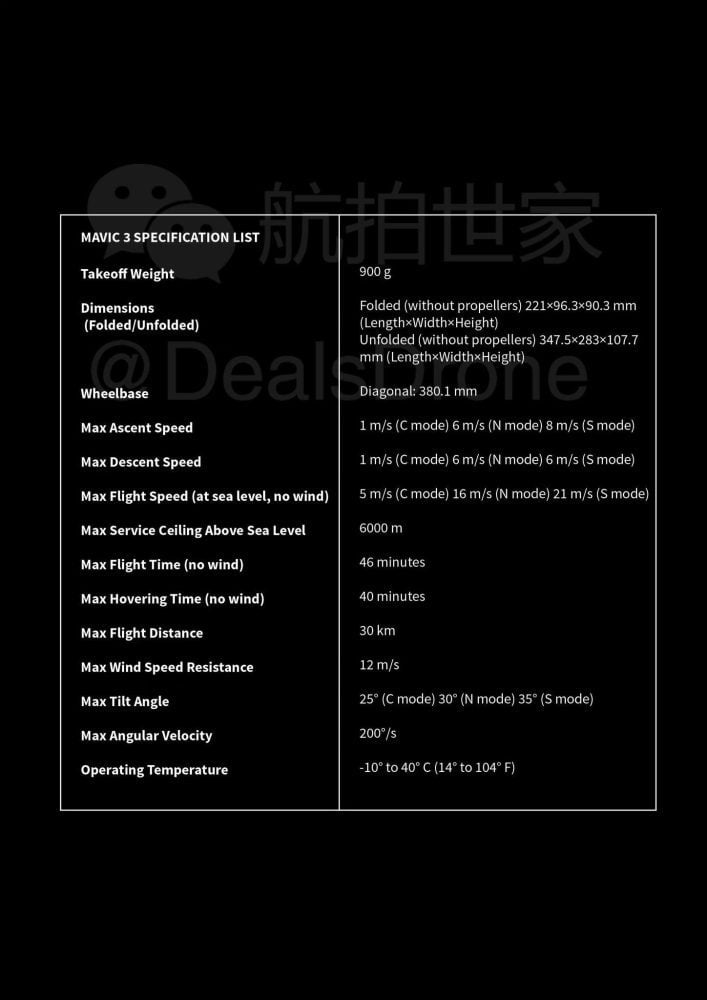 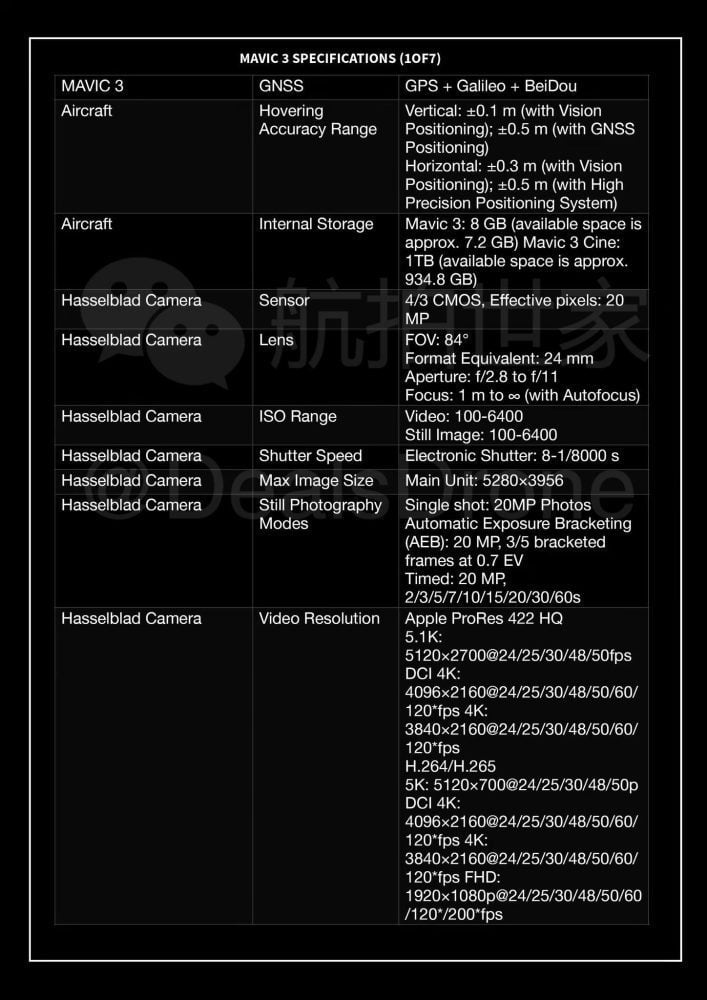 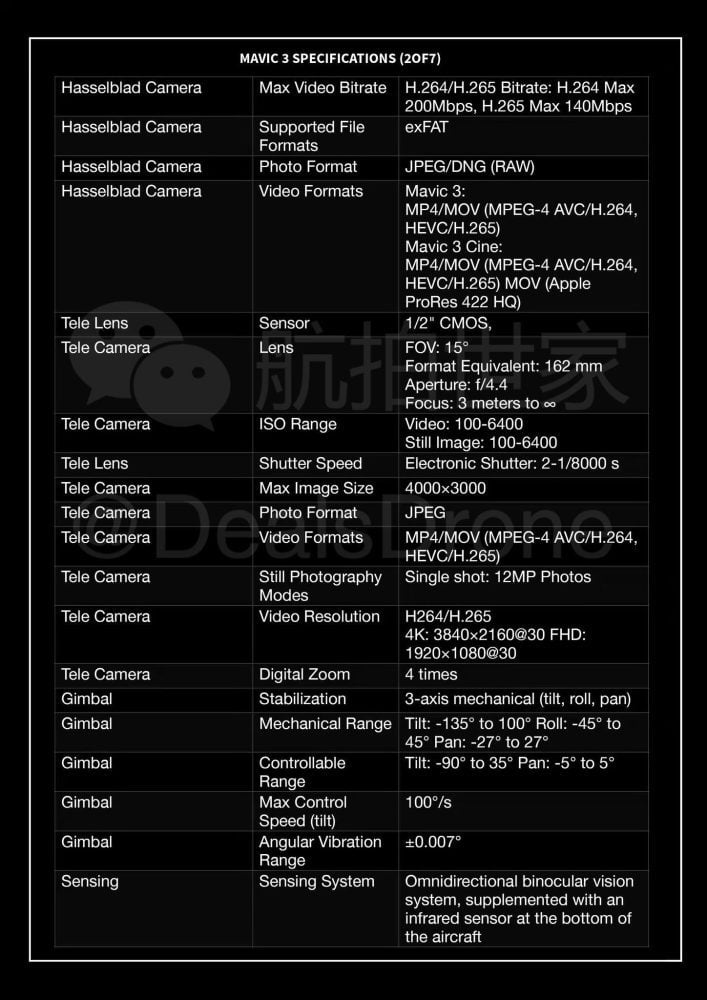 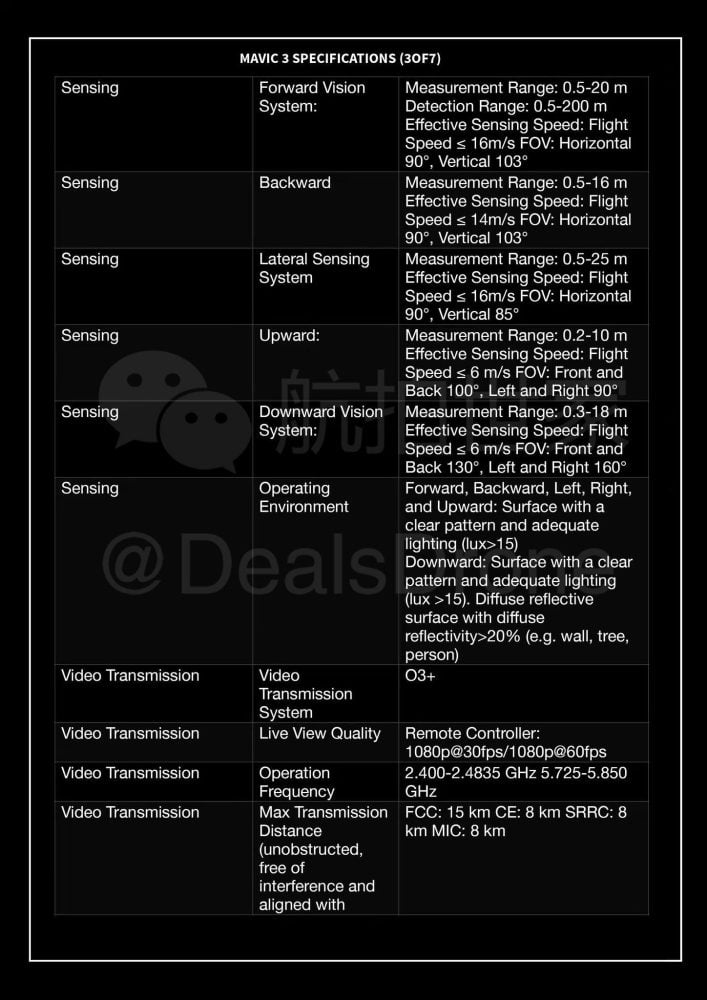 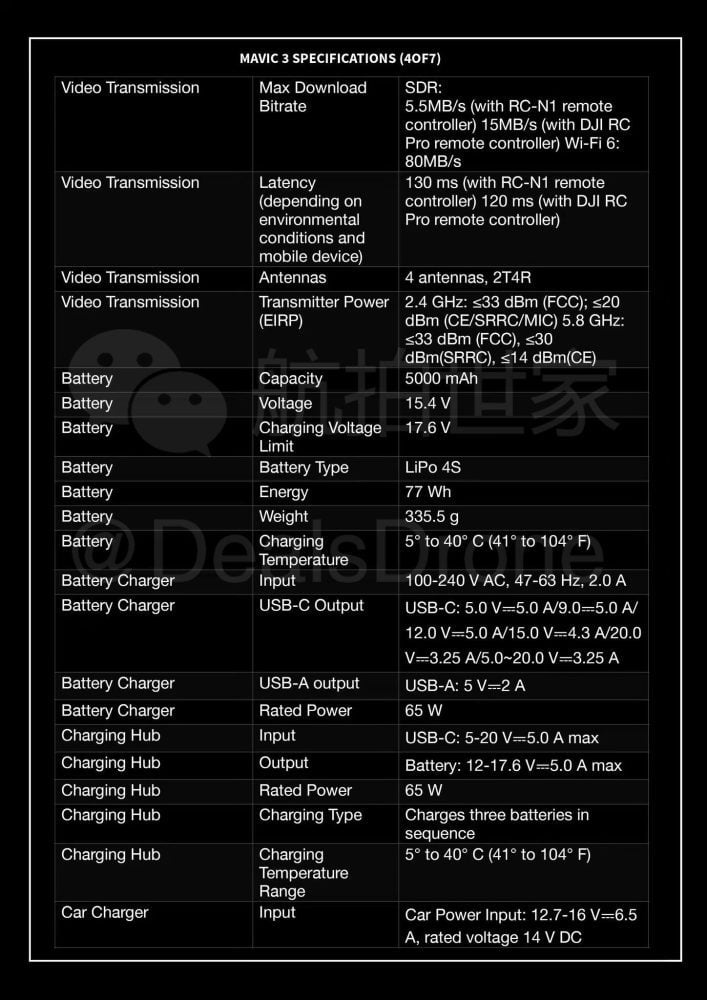 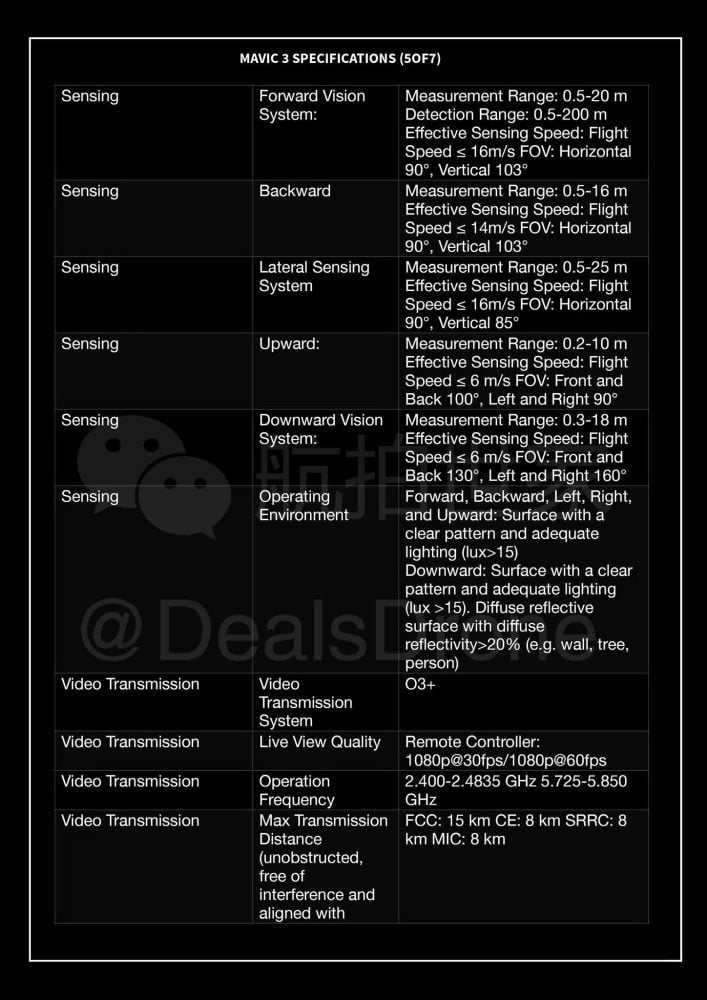 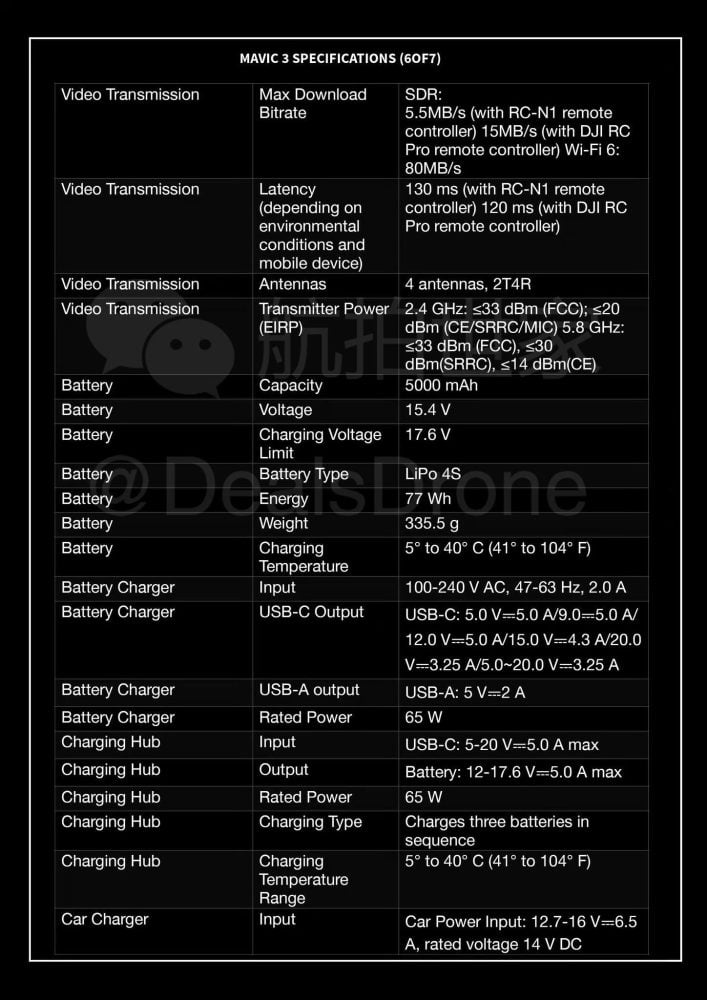 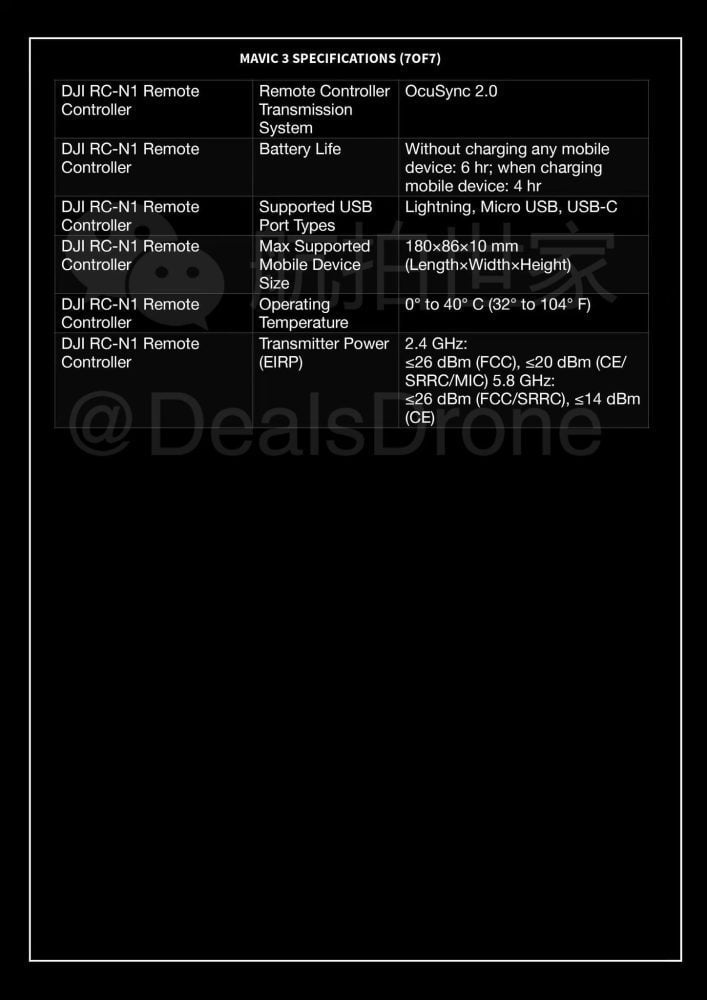