A groundwater tracking drone is used by the University of Rhode Island researchers to monitor salt ponds. Leaking septic systems, damaged underground infrastructure, excessive fertilizer use, and other land uses can contaminate groundwater. However where that water and the contaminants end up if the million-dollar question. URI researchers have now turned to drones to help answer it.

A team of University of Rhode Island researchers led by doctoral student Kyle Young has been using a drone with an infrared thermal imaging camera to track some of the groundwater to the ocean states coastal ponds.

“We’re looking to quantify the amount of nutrients being brought into our estuaries and what’s happening to those nutrients,” said Young, a Coast Guard helicopter pilot and physics teacher at the Coast Guard Academy on leave to earn his doctorate, reports The Westerly Sun. “The key nutrient is nitrate. In small amounts, nitrate is a good thing, but in larger amounts it can be degrading to the ecosystem.” 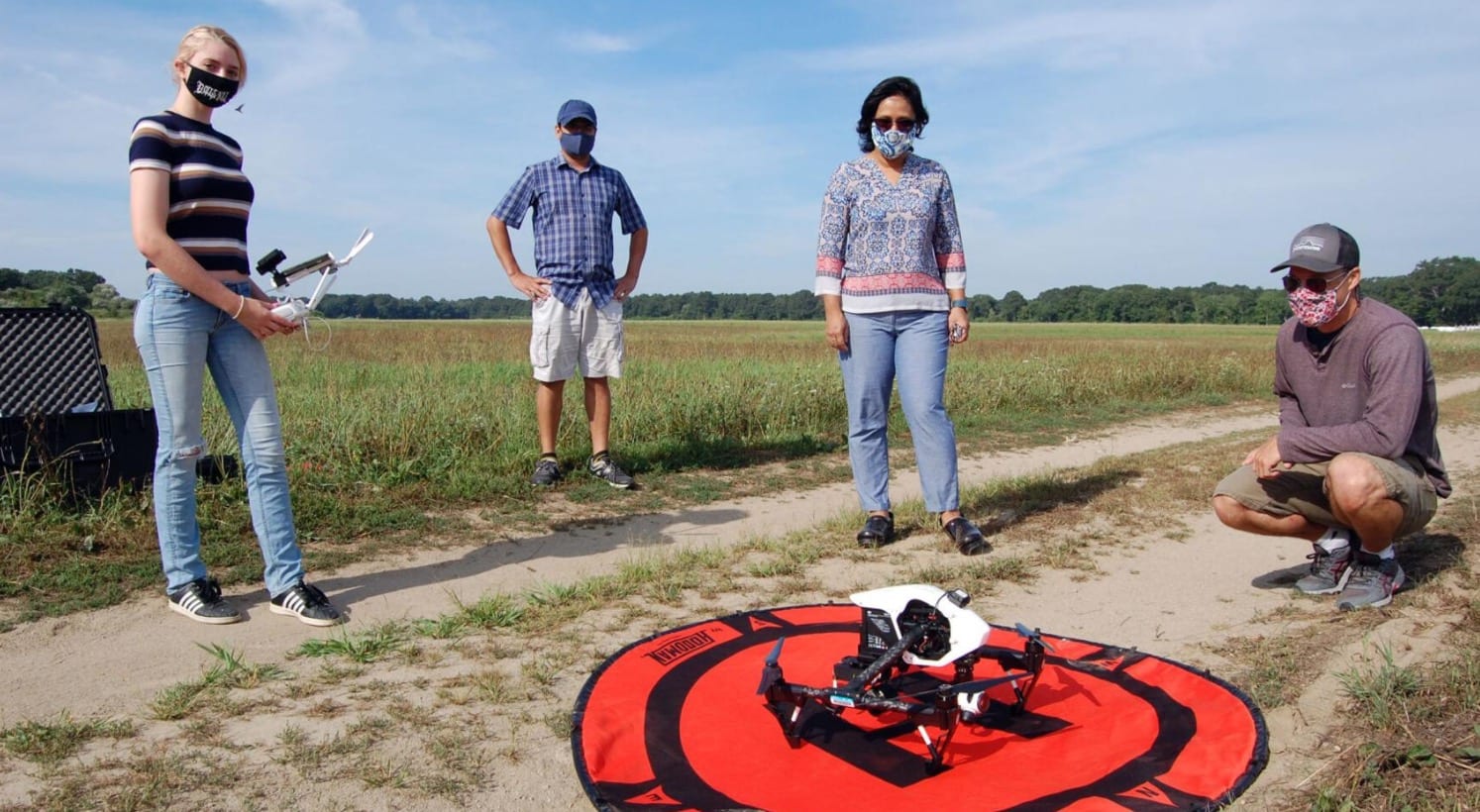 The research team is looking to quantify the discharge of groundwater into the salt ponds as part of what they call a ‘water budget’ that keeps track of all the water flowing in and out of the ponds.

“We know the amount of precipitation that comes down, we can quantify how much runoff goes into stream water, but one thing that’s not easy to directly quantify is groundwater flow,” said URI Associate Professor Soni Pradhanang. “We don’t know how much water is going from the aquifers into other water bodies.”

Especially during the late summer, the groundwater temperature is lower than the saltwater in the pond, making it easy to spot the colder groundwater plume with a drone outfitted with an infrared thermal imaging camera.

Young, Pradhanang, graduate student Jeeban Panthi and undergraduate Janelle Kmetz have flown the $10,000 drone over the Green Hill and Ninigret ponds and the infrared images clearly show significant cool zones, suggesting that groundwater is seeping into the ponds. Because groundwater is freshwater and is, therefore, less dense and the saltwater in the ponds, it rises to the surface and is easily detected with the infrared camera.

“Just because we don’t see plumes in some areas doesn’t mean there isn’t groundwater discharge there, too,” noted Young. “There could be too small of a freshwater component for it to show up in the thermal signature, or it might not be cool enough compared to the surrounding water. But one thing we can say about the plumes we found is that they have ample freshwater, signifying waters that came from the terrestrial zone.”

At this point, it’s not clear yet what the groundwater discharges mean for the health of the coastal ponds. The groundwater is not always contaminated and discharges such as these have most likely been going on for many decades. However, knowing the points of entry might be helpful in the future when tracking the movement of contaminants.

After localizing the groundwater entry points, Young continues flying his drone to monitor the effects of the weather and tides on the coastal ponds.

“Flying highly sensitive equipment on an aircraft is high-stakes research,” he said. “Quantifying how the discharge changes over time is the next step. But so far it’s nice that we’ve been able to identify the sites of possible pollution contribution to the ponds.”

Professor Pradhanang hopes future students will continue the project to identify groundwater discharge locations and quantities into other salt ponds, coastal and freshwater bodies, after Young returns to the Coast Guard Academy next year.