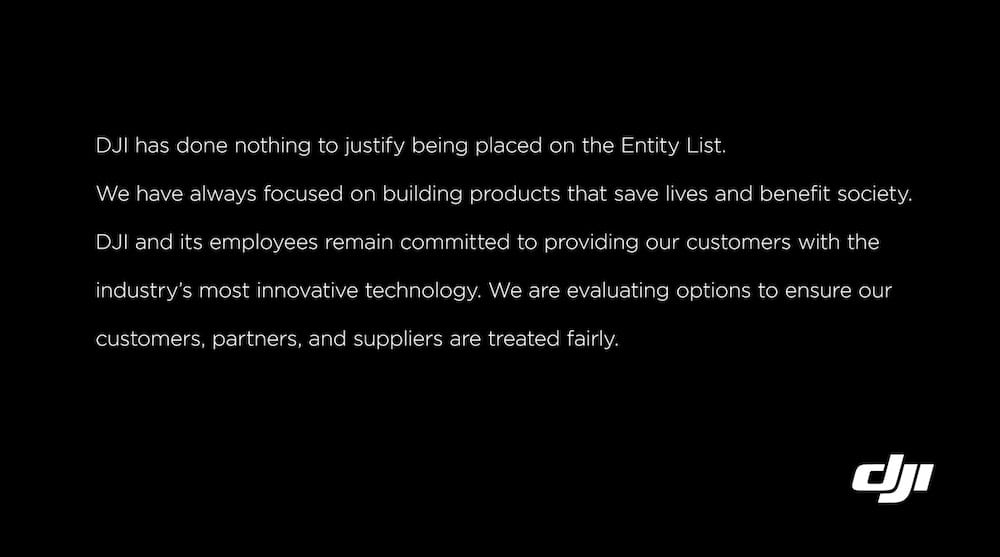 DJI’s response to being placed on economic blacklist

Last Friday, DJI was placed on the economic blacklist, officially known as the ‘Entity List’, by the U.S. Department of Commerce. DJI had already issued a short response on the same day, but just now they added a slightly more detailed reply on Twitter.

DJI’s response to being placed on the economic blacklist

DJI’s placement on the economic blacklist means that U.S.-based companies that want to export hardware or software to DJI will need to obtain a special license, which may not be easy to obtain. DJI’s addition to this list was made effective at 11:15 am on Friday.

It seems that this measure by the U.S. Government will not have an immediate impact on the availability of the popular DJI drones in the stores in the U.S. It is yet unclear if this will change in the future. In the past, certain DJI products did contain components from U.S.-based companies. Examples are the thermal cameras from FLIR Systems, the Ambarella processor that is found in a number of DJI drones, an Intel chip in the discontinued DJI Spark drone. And, there might well be more components inside DJI drones that we are not aware of. However, there is a good chance that DJI will quite easily be able to make drones that do not contain any hardware parts from U.S.-based companies. For instance, in the latest DJI Mavic 2 Enterprise Advanced, the thermal camera is not from FLIR but seems to be an in-house developed camera from DJI. As far as software is concerned, it is unclear how DJI will be impacted here. Can the company keep using Google’s Android system for the DJI Smart Controller? Will the DJI Fly app and others still be downloadable on Apple’s Appstore and Google’s Playstore?

But, we’re getting off track here. Last Friday, DJI quickly stated that:

“DJI is disappointed in the U.S. Department of Commerce’s decision. Customers in America can continue to buy and use DJI products normally. DJI remains committed to developing the industry’s most innovative products that define our company and benefit the world.”

And today, the company added the following on Twitter:

“DJI has done nothing to justify being placed on the Entity List. We have always focused on building products that save lives and benefit society. DJI and its employees remain committed to providing our customers with the industry’s most innovative technology. We are evaluating options to ensure our customers, partners, and suppliers are treated fairly.”

DJI and other companies were added to the list because of “wide-scale human rights abuses within China through abusive genetic collection and analysis or high-technology surveillance,” according to the U.S. Commerce Department reported Reuters. Reference has been made to a passage from Bloomberg that indicates that DJI supplied police drones as part of a deal for “strategic cooperation” to the public security bureau of Xinjiang in China. This information was available in a statement from DJI on the company website it has since been removed.

This morning, the Mavic 3 specs were leaked on Chinese social media and shared online. Here’s the latest on the DJI drone that will almost certainly be released on November 5th, 2021. Update: More DJI Mavic 3...

Check out these epic FPV drone shots that show pro cyclist Danny MacAskill riding his bike on a turbine blade hundreds of feet high in the sky.
Facebook Comments