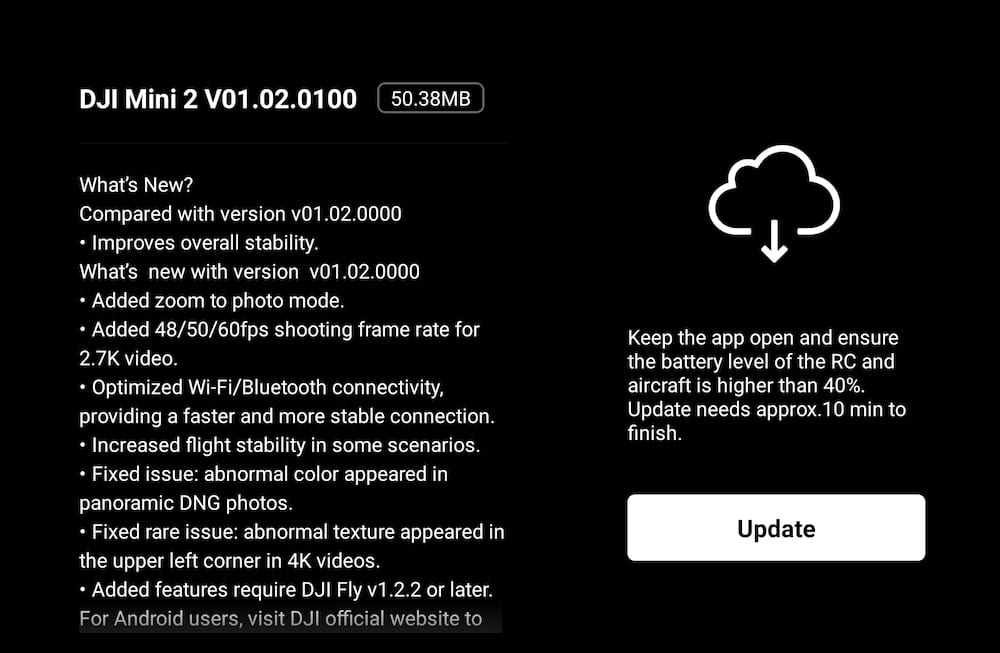 DJI has released a new firmware update for the popular DJI Mini 2 drone and its controller. The update brings a lot of improvements, including the ability to film up to 60 fps in 2.7K resolution and the option to zoom in while shooting. DJI has also fixed a number of bugs.

The major update has been given version number 01.02.0000. Shortly after, v01.02.0100 was released, which fixed a few more bugs. The update concerns both the drone and the controller. So take the time for the upgrade process, best performed when you are within range of a WiFi hotspot. You can only perform the update from DJI Fly version 1.2.2.

Regarding new features, the firmware update brings the possibility to film at higher frame rates if you use the 2.7K resolution. You can now choose 24, 25, 30 48, 50, and 60 fps. Furthermore, there is now the option to digitally zoom in during shooting (this was already possible during filming).

There are also the necessary bug fixes. First, overall stability has been improved. In addition, a bug has been fixed that caused strange color differences when making panoramas in RAW format. Wi-Fi & Bluetooth connectivity has also been improved.

The DJI Mini 2 is without a doubt the most popular DJI drone at the moment. The fact that the drone weighs just under 250 grams means that you do not need to register your drone in the United States as long as you fly recreationally. Also, check out our review of the DJI Mini 2.