Earlier this week a disturbing video showed up on TikTok in which an alligator grabs a DJI Spark drone mid-air. The reptile attempts to eat the unmanned aircraft, and as it chomps down on the drone, the lipo battery catches on fire.

In the troublesome video, the Florida alligator is referred to as ‘George’ by the people recording the footage. It appears that the video was made in an effort to get a close-up of the reptile, however, in a quick move the alligator snatches the DJI Spark drone out of the air, and as it attempts to eat the unmanned aircraft the battery is punctured and catches on fire.

The video went viral and has been viewed more than three million times leaving many viewers angry and upset over the pain inflicted on the animal. The TikToker, @devhlanger who posted the footage said that the drone incident took place in the Everglades but in an area that is not controlled by the National Parks Service. National Parks in the United States do not allow you to fly drones.

The video was uploaded to TikTok in two parts. The first episode was posted on August 22nd and is captioned:

“Trying to get a close up of this alligator in the Everglades … wait till he chews through the drone’s battery.” The second video was made available on Monday, titled: “Part 2 of the alligator eating my drone.” 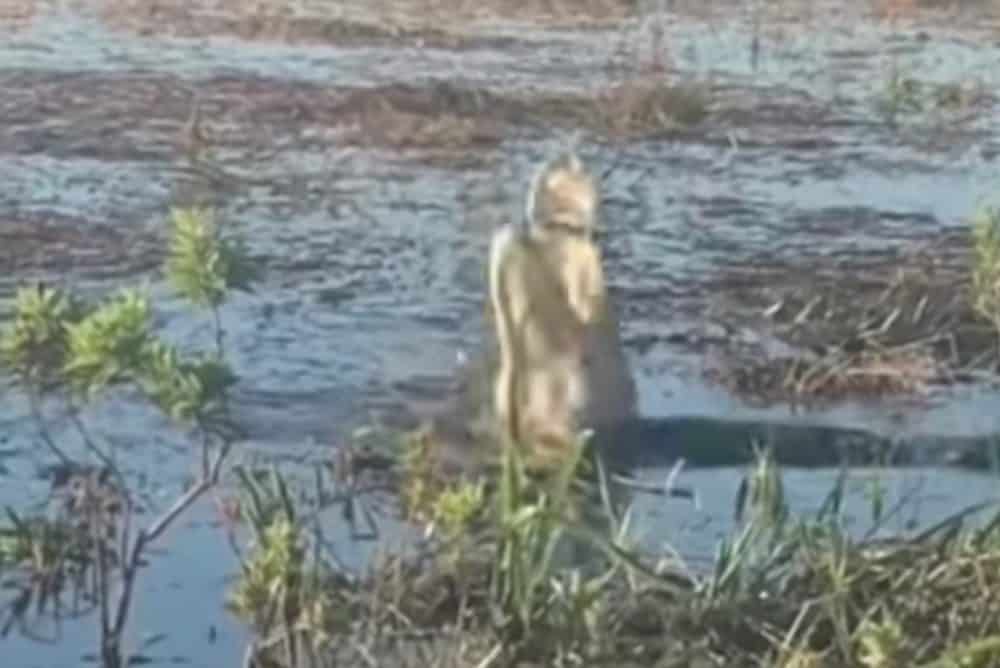 The video shows the alligator grabbing the drone midair and as the animal starts to gnaw on the unmanned aircraft the battery gets damaged and catches on fire. The smoke is clearly visible around the head of the reptile. In the background of the video you can hear somebody calling the alligator an “idiot.” At the end of the video, the reptile is still alive and seems to struggle with the burning drone.

The caption of one of the videos reads: “Videos combined. We were trying to get a close up of the gator with its mouth open and thought the obstacle avoidance would make the drone fly away (was only our second time using the spark).”

In the same description, the maker of the video claims that the alligator, George is ok.

“George is doing fine and still looked hungry after.”

Flying drones in National Parks such as the Everglades is illegal, however, the TikToker claims that the incident took place outside of the park.

“This is outside a national park … this is on a tour … I’m clearly filming the drone x flying the drone … [it was] accidental … direct your anger towards alligator farms.”

Newsweek has reached out to the maker of the video for comment, but no response has been received as of yet. It is illegal to intentionally injure or kill, or even attempt to injure or kill an alligator. The creator of the video claims that the incident was accidental. It is unknown if the Florida alligator was injured or possibly killed as a result of attempting to eat the DJI Spark drone.

We at DroneXL promote and advocate safe and responsible drone flying in accordance with the drone regulations from the Federal Aviation Administration (FAA). And while we do not know for sure where this video was recorded, we do want to point out that in National Parks such as the Everglades, flying drones is not permitted. Secondly, flying drones in close proximity is a very bad idea. Apart from breaking any local laws and regulations, your drone will likely scare the wildlife or even worse as you can see in the video below, injure or even kill the animal. Safe and responsible drone flying also means using your common sense. Flying a DJI Spark drone this close to a Florida alligator is not a great idea under any circumstances. Please don’t do it, ever.