By now, many people will have seen drone videos or photos of the mass burials of unclaimed COVID-19 victims at Hart Island in New York. We reported on that about a week ago, but so did many other news outlets. Today we learn on Instagram that George Steinmetz’s DJI Mavic 2 Pro drone has been confiscated by the New York Police Department (NYPD) after the famous aerial photographer tried to capture some photos of the burial scene on the island.

Article updated on April 17th, 2020 with a comment that Steinmetz provided to DPReview.

On Instagram, George Steinmetz writes that during a scouting flight with his DJI Mavic 2 Pro drone, his unmanned aircraft was seized by the NYPD. Steinmetz said:

“Preparing for burials of what appear to be more COVID-19 victims this morning on Hart Island, New York City. For over 150 years this island with no public access has been used to bury over a million souls who’s bodies were not claimed for private burial. With the morgues of NYC strained, the pace of burials on Hart Island has increased dramatically. I was cited by NYPD while taking this photo, and my drone was confiscated as evidence, for a court date tentatively scheduled for mid-August.”

In the comments related to his post on Instagram, Steinmetz confirms that the NYPD used this outdated law (NYC PL 10-126) that prohibits anybody fro taking off or landing an aircraft in New York City to cite him. Hart Island and City Island are in the Bronx, which is one of the five boroughs of NYC.

To the question: “Did they charge with NYC PL 10-126 or something else?” Steinmetz responded with:

“Exactly! I knew they were serious about it in Manhattan, but on City Island at sunrise?”

“I’m not trying to be an advocate, but my encounter with the NYPD [on Tuesday] was not about any safety or privacy considerations that I assume the law was designed for. The officers who cited me were not local, and appeared to be working in conjunction with city employees involved with Hart Island interments. It was a clear example of a law being used for petty press intimidation. It doesn’t look good to see the city’s poor treated like toxic waste.”

Steinmetz said he took off from City Island to fly his drone to nearby Hart Island. There are no airspace restrictions at that location other than the standard FAA rules that apply to safe and responsible drone flying. You are far enough away from La Guardia Airport and its restricted airspace. Steinmetz added that a tentative court date had been set for mid-August.

You can see detailed maps of the City Island and Hart Island area here and here. 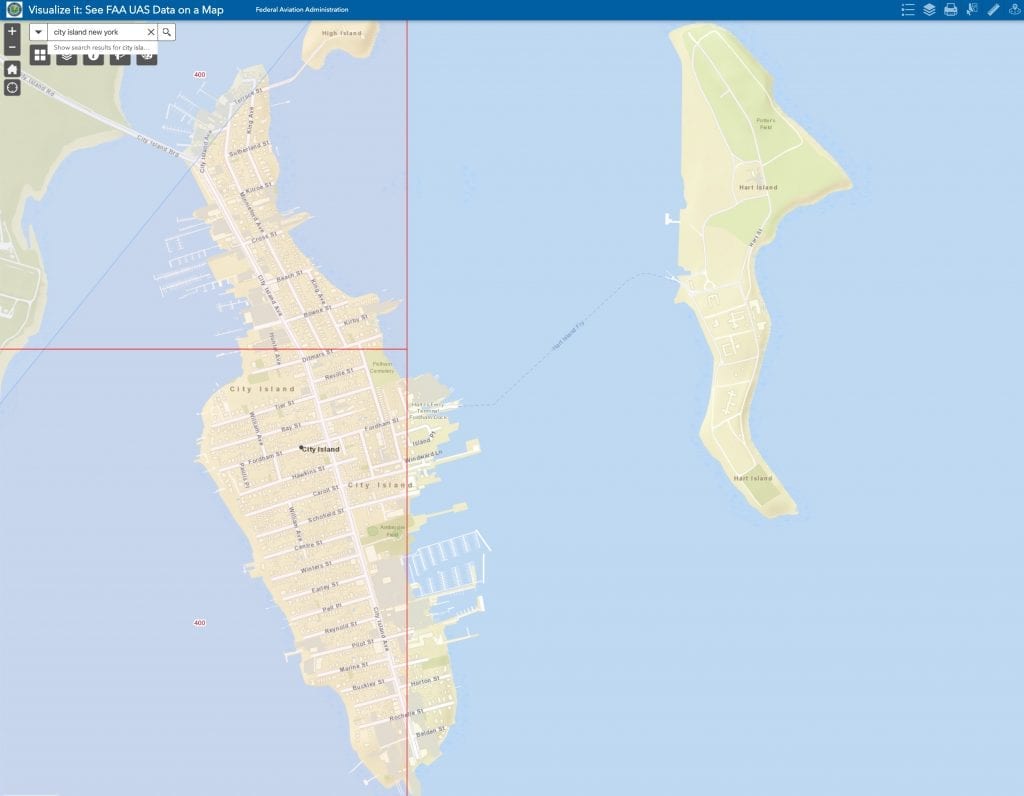 On Wikipedia you can read the following about Hart Island:

“Hart Island, sometimes referred to as Hart’s Island,[a] is located at the western end of Long Island Sound, in the northeastern Bronx in New York City. Measuring approximately 1 mile (1.6 km) long by 0.33 miles (0.53 km) wide, Hart Island is part of the Pelham Islands archipelago, to the east of City Island.”

“The remains of more than one million people are buried on Hart Island, though since the first decade of the 21st century, there are fewer than 1,500 burials a year. Burials on Hart Island include individuals who were not claimed by their families or did not have private funerals; the homeless and the indigent; and mass burials of disease victims.”

The fact that COVID-19 victims are buried in mass graves at Hart Island seems historically significant. It makes you wonder why the NYPD would use a decades-old law to hit George Steinmetz with, in what otherwise seems a perfectly safe and Legal drone operation. If he had launched his drone from a boat, he would probably have been fine. Let us know what you think in the comments below.

For other drone and Coronavirus related stories click here.

Police investigate drone flights up to 4,600 feet in altitude in The Netherlands

The Soul of a City Without People, a cinematic impression of the devastation in Ukraine