Washington State University has used drones to deter birds in trials. Hovering unmanned aerial systems or drones over fruit blocks such as this vineyard in 2018 near Prosser reduced visits from birds by a factor three to five.

A researcher from Washington State University is investigating how to use drones to a grower’s advantage. For three years, Manoj Karkee, a biological systems engineer for the University Center for Precision and Automated Agricultural Systems, has measured how hovering a drone would affect the population of birds in both a vineyard and a blueberry field.

Compared to a controlled environment, using a drone over a vineyard kept birds away by a factor three to sometimes even five. Karkee is positive that the approach with drones will work commercially and some companies are already offering drone bird deterrent services. However, regulations from the Federal Aviation Administration still require a drone to be piloted.

Karkee thinks that this drone technology will take off when the FAA rules allow for fully automated drone flights. We have already demonstrated capability and feasibility of controlling the damage caused by these birds and we hypothesize that this will be a solution that will be more robust than existing methods, Karkee said.

Karkee’s research team had set up experiments with cameras looking down the four field’s boundaries and collaborated with a biologist to counter the birds that would arrive and leave the area. Most of the birds were well-known fruit eaters such as robins and finches.

They completed the bird counting method in one day and then repeated it again with a team member flying a drone. Field researchers also counted the birds to validate the camera research.

On some days, the researchers would let the birds fly freely and on other days they would fly the drone to deter the birds. It made a significant difference. 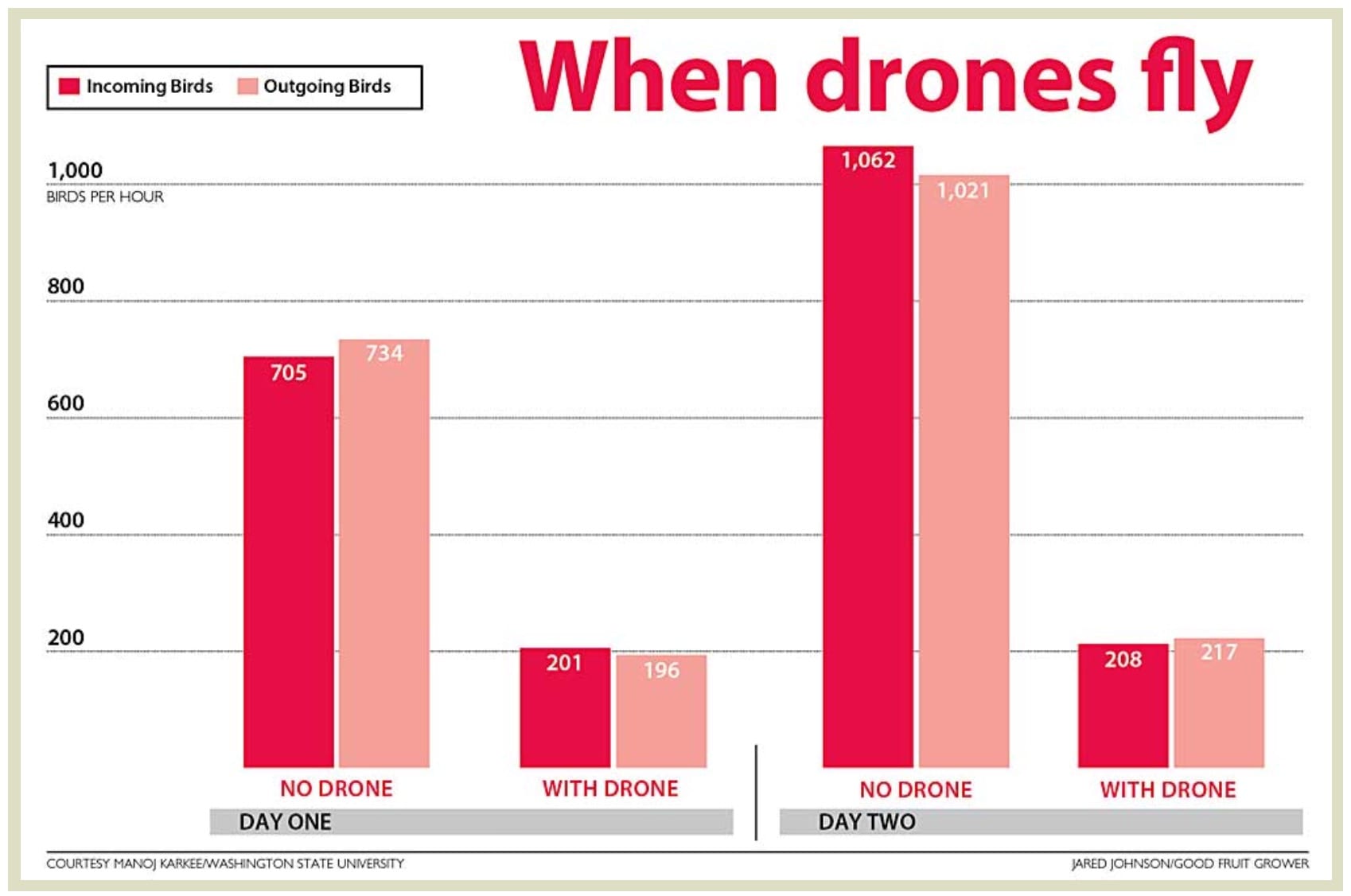 The vineyards where these tests took place was about five acres large, whereas the blueberry field was 15 to 20 acres in size. The research was funded by the Washington Blueberry Commission and internal Washington State University grants. The drone experiments from Karkee and his team took place in 2017 and 2018.

It is unknown what role weather differences might have played in the results. Also, we have to keep in mind that birds are adaptable. According to Good Fruit Grower any grower will tell you that birds will adapt and adjust to whatever tools you throw at them, such as reflective strips, giant inflatables, sound cannons, lasers and sugar coating. Whether the birds would get used to drones is something that we will have to find out over time.

Currently, the FAA allows drones to be automated as long as an operator has access to the controls and keeps the drone within line of sight, ready to take over if anything goes wrong. Karkee envisions a future in which drone rules would be more relaxed and fully automated drone systems would be deployable to deter any birds.

Catherine Lindell, an ornithologist at Michigan State University agreed that automation of the drone deterrent system would be ideal. She also tested drones in 2018 in a sweet cherry orchard, but her results were inconclusive.

Lindell said: “Sometimes pest bird numbers in sweet cherry orchards appeared lower in the presence of drones, and sometimes they were not. Making drones as predator-like as possible likely will reduce the likelihood of habituation.”