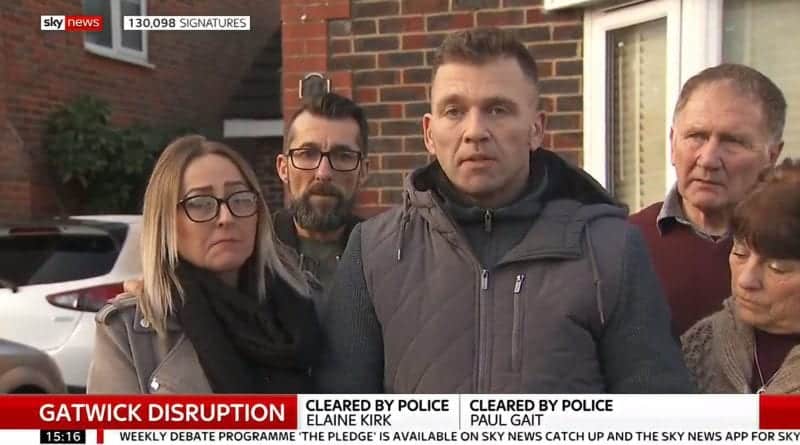 At the end of 2018, London Gatwick Airport was closed for several days due to a number of drone sightings. A search was made for both drones and their operators, but no evidence was provided for the drone flights. A couple who were mistakenly detained now suspect the police of covering up the Gatwick drone incident to protect their own reputation.

The chaotic shutdown of air traffic started just before Christmas, normally the busiest time of the year. Drones are said to have been seen in the vicinity of the airport. As a precaution, all incoming air traffic was diverted. Hundreds of outbound flights were canceled, resulting in tens of thousands of passengers. The damage quickly ran into the millions.

Initially, Sussex Police were investigating the matter. Later, the army was also called in. Drone detection equipment was hastily installed and a frenetic search for those allegedly responsible began. But apart from the witness statements, no evidence was found that any drones had flown around at all.

Suspects of the Gatwick drone incident

Two days later, a couple was arrested on suspicion of ‘criminal use of drones’. It was about couple Paul Gait and Elaine Kirk, who lived near the airport and were known in the area for their drone hobby. Further investigation revealed that the two had nothing to do with the Gatwick drone incident. The couple then sued the police. That led to a $253,000 indemnity.

During the investigation, the Sussex Police investigated 96 possible suspects. Gradually everyone was crossed off that list. However, the investigative report was never made public. Even a request for information from a news organization was rejected: according to the police, the report would contain confidential information.

Cover up of the Gatwick drone incident

However, married couple Kirk and Gait think there is another reason that the report should not be made public. The couple told the BBC:

“We don’t think this is about lessons learned and preventing harm in the future, but about protecting the reputation of the Sussex police from scrutiny and criticism of our pain, and the illegality and injustice that occurred to us. This most recent failure to deal honestly and openly with us is a missed opportunity to give us a measure of truth and reconciliation that we owe us.”

The couple is supported by Conservative MP Henry Smith, who himself represents the Gatwick region. Smith thinks the police force is “ashamed” of the contents of the report and therefore does not want to release it.

However, the police stick to their own reading that the report contains confidential information: “The report contained sensitive details relating to the operational police and national security. At the time, we shared our knowledge with partners in the police and aviation industry at home and abroad, with public safety being a priority.”

The Gatwick incident led to increased attention worldwide for airport security, especially in the field of unwanted drones. Many airports today are equipped with drone detection systems. Drones are regularly spotted flying too close to airports, sometimes resulting in disruption of air traffic.

If you are interested in learning more about the ultimate workhorse drone from DJI? Check out these videos from Billy Kyle where he explains all the ins and outs of the DJI Mavic 2 Enterprise Advanced.