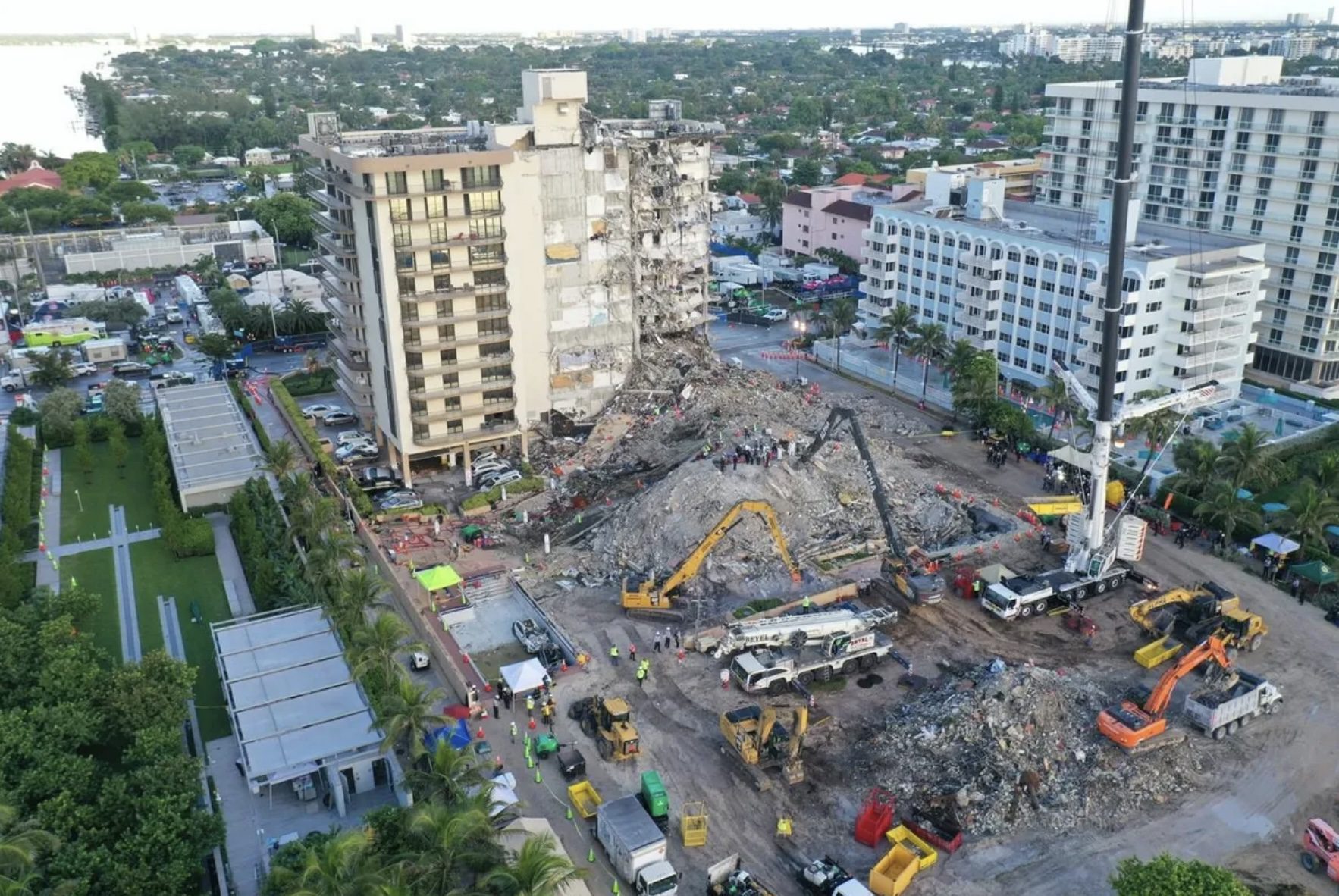 After the 12-story Champlain Towers South condominium in Surfside, Florida collapsed on June 24, 2021, at 1:25 am, drones were flown night and day to survey the Surfside condo collapse and look for survivors. In total, more than 300 drone flights were performed with nine different drone models.

The Surfside condo collapse is the third-largest fatal building collapse in US history, killing 98 people and injuring 11. The collapse of the 12-story Champlain Towers South condominium in Surfside happened on June 24, 2021, at 1:25 am.

An excellent and detailed article in IEEE Spectrum explains how drones were used during the life-saving and mitigation Response Phase from June 24 to July 7, 2021. This is the phase where First Responders from local, state, and federal agencies searched for survivors and victims.

Drones, such as the DJI Mavic Enterprise Dual outfitted with a thermal camera, were immediately used upon arrival by the Miami Dade Fire Rescue (MDFR) Department to survey the 2.68-acre site of the Surfside condo collapse. The drone was flown in the dark to both survey the site as well as look for survivors in the immediate aftermath of the collapse.

In the days after the collapse at least nine different drone models were used to support the overall disaster response effort. The following drones were used:

During the aftermath of the Surfside condo collapse, 304 drone missions were flown for strategic operations alone, excluding tactical drone flights. This makes it the largest and longest post-disaster drone use, even exceeding the number of drone flights after Hurricane Harvey (112) and Hurricane Florence (260), reports IEEE Spectrum.

The authors of the article were directly involved in the tactical and strategic drone operations. They offer both a preliminary analysis and share some of the lessons learned. More details are expected to be shared in the coming months as the investigation into the collapse will be finalized.

Drones were used for tactical missions

Almost immediately after the collapse of the Surfside condominium, DJI Mavic Enterprise Dual drones were used by the MDFR for direct life-saving, mitigation operations, and general situational awareness. The thermal sensor resolution on the M2ED in combination with much of the debris being the same temperature did not provide much detail. The Spotlight on the drone together with the standard visible light camera proved to be more helpful. During the daytime hours, DJI Mavic 2 Zoom drones were used as they are outfitted with higher resolution cameras. Unmanned aircraft were also used to help optimize the position of water to extinguish fires, locate civilians trying to enter the site, and spot amateur drone pilots looking to get some aerial shots. In the days after the collapse drones were also used to help read license plates, search for pets, and to document personal belongings found in the rubble.

Before the demolition of the standing portion of the tower, MDFR used a drone to remove an American flag that had been placed on the structure during the initial search, IEEE Spectrum reports.

On July 1st, the Disaster Incident Research Team (DIRT) from the Florida State University Center for Disaster Risk Policy used drones to create an orthomosiac of the collapse. These maps were created every two to four hours during daylight during the first two weeks. On July 4th a 3D model was created of the site before the standing portion of the building was brought down. Special software was used to determine flight paths and to take the aerial photographs with enough overlap to accurately stitch the photos together.

The drone teams and Federal Aviation Administration (FAA) officials worked together using a WhatsApp group that was managed by MDFR. The app allowed all involved to easily communicate with each other from their mobile devices. While the tactical and strategic drone teams had a common space, nicknamed the ‘Drone Zone’, the use of WhatsApp allowed other drone pilots to start flying immediately with few if any physical meetings or briefings.

The teams flew concurrently and independently without rigid, pre-specified altitude or area restrictions. One team would post that they were taking off to fly at what area of the collapse and at what altitude and then post when they landed. The easiest solution was for the pilots to be aware of each others’ drones and adjust their missions, pause, or temporarily defer flights. If a pilot forgot to post, someone would send a teasing chat eliciting a rapid apology, IEEE Spectrum reports.

Lessons learned from using drones at the Surfside condo collapse

During the response phase, both tactical and strategic operations preferred using small, inexpensive drones such as the DJI Mavic Enterprise Dual, which are easy to carry over the use of large aerial platforms equipped with LIDAR systems.

General-purpose consumer/prosumer drones that could fly day or night, indoors and outdoors, and for both mapping and first-person view missions were highly preferred over specialized drones.

The reliability of these consumer drones was another major factor to select them over specialized high-end unmanned aircraft. For overwatch purposes, tethered drones offer some advantages, but both for tactical and strategic operations the mobility that the small drones offer was preferred.

The use of the small consumer/prosumer drones after the Surfside condo collapse also brought to light areas for improvement for night-time and indoor flights. Robust 360-degree obstacle avoidance would help to fly the drones closer to or even inside the structure. And a wider area of lighting would make night-time operations easier. The article also pointed out that the ability to determine the GPS location of something shown by the drone camera became increasingly important. More so than the location of the unmanned aircraft itself.

Spotting or finding humans among or underneath the debris proved difficult with drones. Canines using scent were favored during search missions.

The response to the Surfside condo collapse showed that the efforts from First Responders do not follow ‘a strictly centralized, hierarchical command structure and the agencies and members of the response are not known in advance.’ It is important that the communication systems and drones are flexible, robust, and easy to use. WhatsApp and consumer/prosumer drones proved to be very useful and effective during that time.

The authors of the article who were directly involved in the response effort state that:

The biggest lesson learned is that robots are helpful and warrant more investment, particular as many US states are proposing to terminate purchase of the very models of drones that were so effective over cybersecurity concerns.

While it is difficult to express the exact value that drones provided during the response efforts after the Surfside condo collapse, their contribution and added value are shown in the large number of drone flights that were completed in the days and weeks after the event. Had the unmanned aircraft failed to add value in any way, they would not have been used so extensively.

The 2D and 3D models of the Surfside condo collapse that were created with photos taking by drones helped in understanding why the building had failed. They also were used to identify areas where survivors or victims were likely to be found. Throughout the response efforts, drone pilots remained on standby 24/7.

The IEEE Spectrum article is very informative and insightful as many of the authors, including Robin Murphy, David Merrick, Justin Adams, Jarrett Broder, Austin Bush, Laura Hart, and Rayne Hawkins are part of the Florida State University’s Disaster Incident Response Team, which was in Surfside for 24 days at the request of Florida US&R Task 1 (Miami Dade Fire Rescue Department). 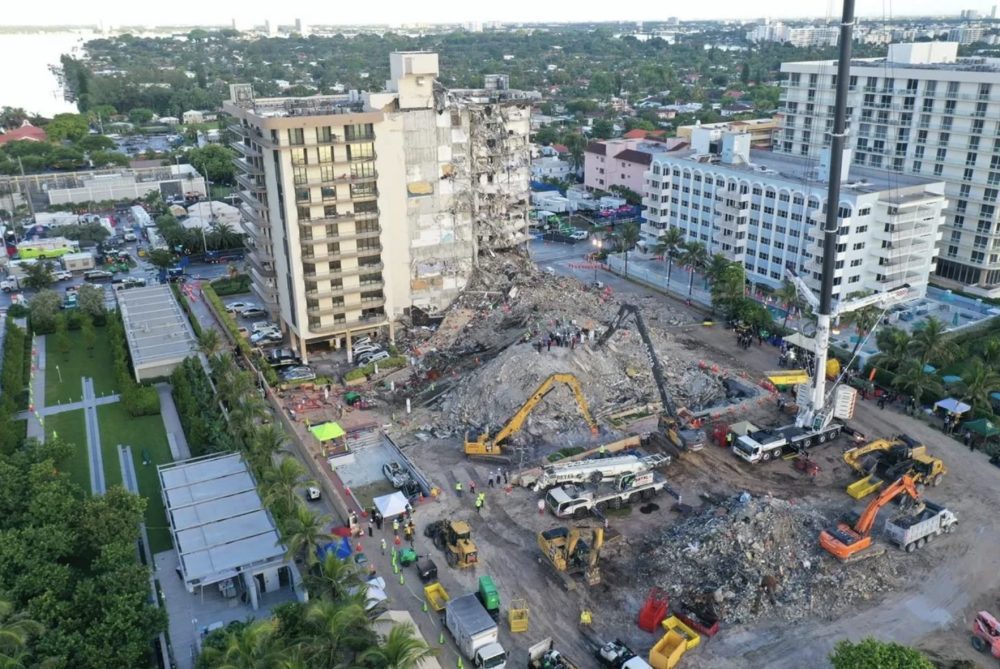