Volarious, a Singapore-based startup, has created an app to aid with the launch and landing of a drone on a moving boat. Now, a DJI Mavic 2 Enterprise Advanced drone can not only take off and land autonomously, but it can also follow the ship while sailing, thanks to the V-Line Boat Mode. In addition, while landing the drone the technology adjusts for the rolling movement of a ship. The software was designed to work in tandem with the Volarious cable drone system, but it may also be used separately.

Many patrol vessels have limited deck areas for launching and landing drones. This presents some difficulties for new pilots since one false maneuver might cause the drone to crash into the ocean. The option is to hand-capture the drone once it is near to the ship, but this is also risky. A ‘hand catch is not advised, especially in big seas.

Another problem of transporting a ship is the inability to employ standard cable drone systems. The electricity in such a system is provided via a cable (‘tether’) from a ground station. The benefit is that the flight period is theoretically endless; the downside of a cable drone system is that the ground station cannot or is difficult to relocate while the drone is in the air. This makes cable drones difficult to deploy from patrol boats, for example. 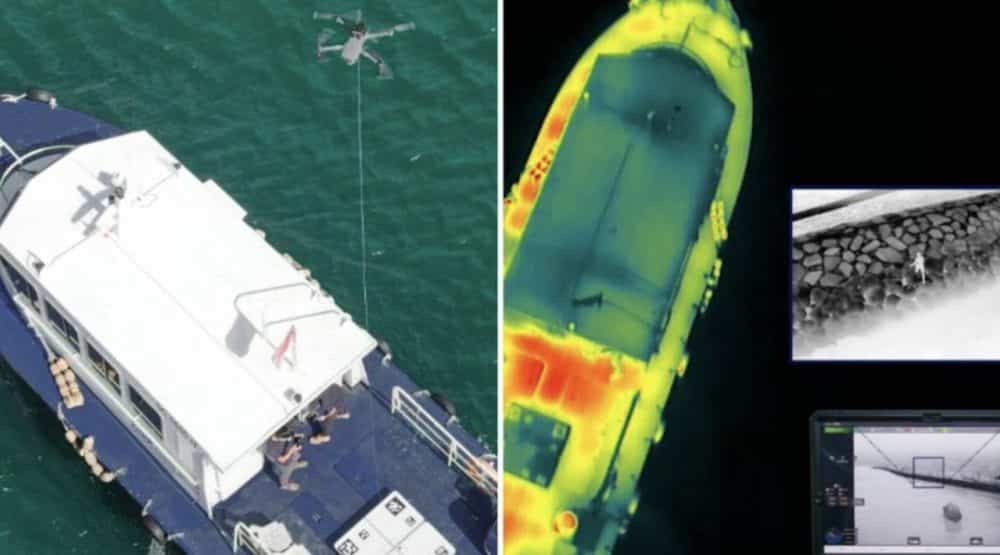 The Volarious app’s new V-Line Boat Mode should alter that. This is accomplished via the use of software that coordinates the motions of the drone with those of the boat. The system may be utilized in conjunction with the V-line cable drone system as well as separately with a free-flying drone.

“We built the V-Line Boat Mode with the goal of fully automating the entire process from takeoff to landing,” said Weiliang Zhang, founder of Volarious. “This innovation enables users to expand their operational capacity, for example during patrols in port areas and inland waterways.”

Users will require a specific landing pad and the Volarious app to utilize the automated capability. The drone lifts off with a single press of the button and then automatically follows the ship. This allows the ship to observe the surroundings from a high height while going through. The technology was designed to work with the DJI Mavic 2 Enterprise Advanced, which has a thermal imaging camera as well as an optical zoom camera.

Advanced algorithms direct the Mavic 2 Enterprise Advanced during landing to ensure a safe return to the ship. The vessel’s drift and rocking motions are automatically corrected for. The system is controllable from the cabin.

drone with a cable

The new software is also compatible with the V-Line cable drone system. Volarious stresses the idea of having the drone transmit high-quality live video pictures through 5G, allowing other parties to observe during a patrol tour.