This week new photos appeared online that show the Parrot Anafi Thermal SE outdoor tactical drone in greater detail and also side-by-side to its smaller brother the Parrot ANAFI. As we said before, this seems to be the perfect search and rescue drone.

Update with more info on the name and two different versions here.

Not much is known about the Parrot Anafi Thermal SE outdoor tactical drone at this point. A few months ago it appeared on a drone expo and we received the following photos (and video) that were taken at that location.

The first photo shows the new Parrot Anafi Thermal SE right next to the Parrot Anafi and it really doesn’t look much bigger. The new drone seems to be a little beefier and more rugged for outdoor tactical use. It seems that it would have a longer flight time (maybe as much as 30 minutes) and probably a much better transmission system and operating range judging by the size of the antenna.

Somebody who has seen the drone first-hand commented:

I got a close up look at the still in development, and unnamed, Parrot aircraft, similar to the Anafi. This aircraft is larger, looks and feels more durable, and will have a longer flight time. The dedicated remote has a built-in and bright screen, and is lightweight. The motors are larger, with serrated blades, supposedly to cut down on prop noise.

The motors and propellers are significantly larger compared to the original Anafi, which would allow the new Parrot Anafi Thermal SE to carry a heavier payload. It would likely have much better flight characteristics than the original Anafi.

The original Parrot Anafi is very lightweight, has folding arms, and packs away neatly. It appears that the same is true for the Parrot Anafi Thermal SE which would make it an ideal drone for tactical outdoor operations or search and rescue missions. 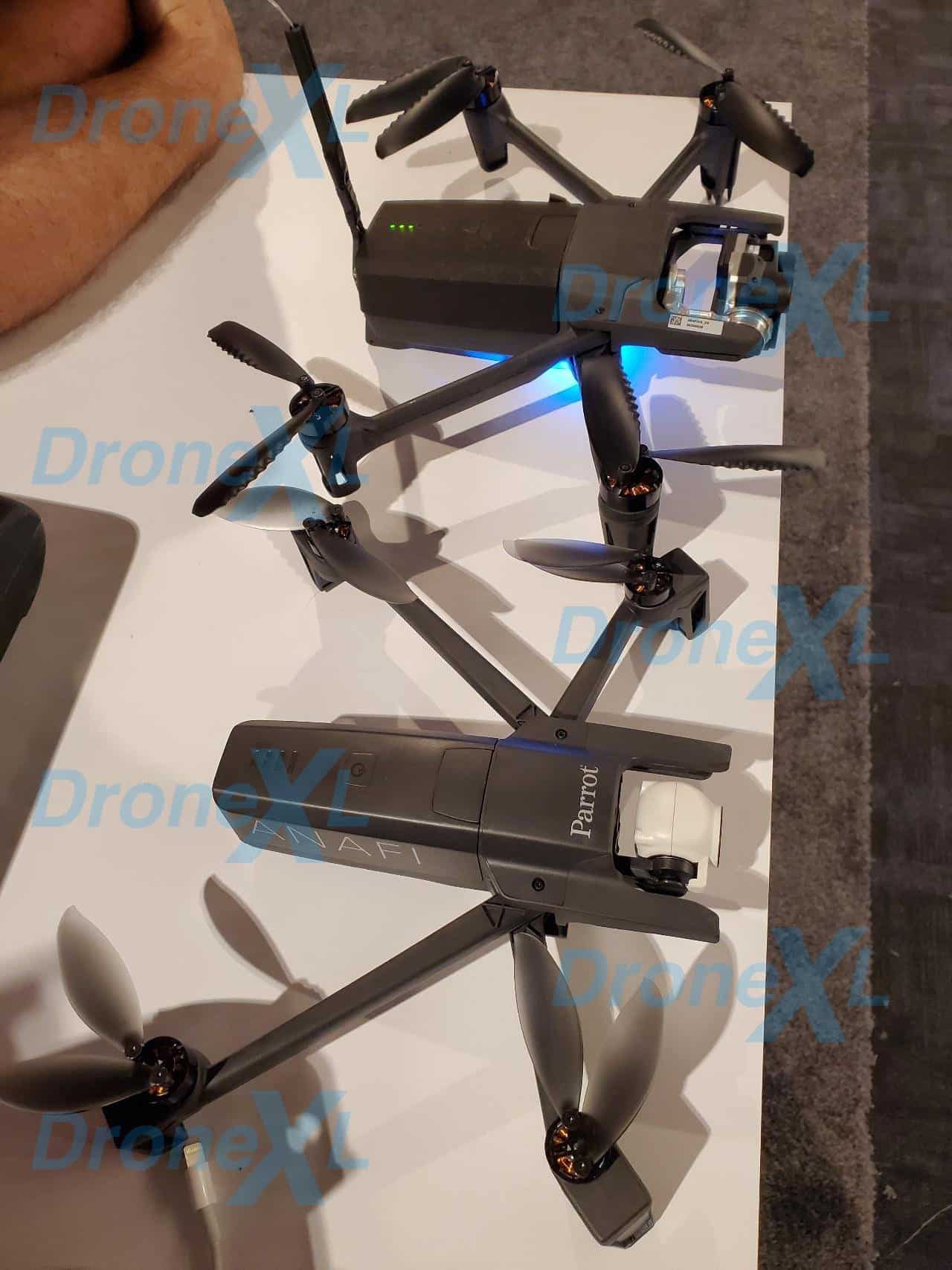 The photo below gives us a better look at the new dual-camera setup of the Parrot Anafi Thermal SE drone. 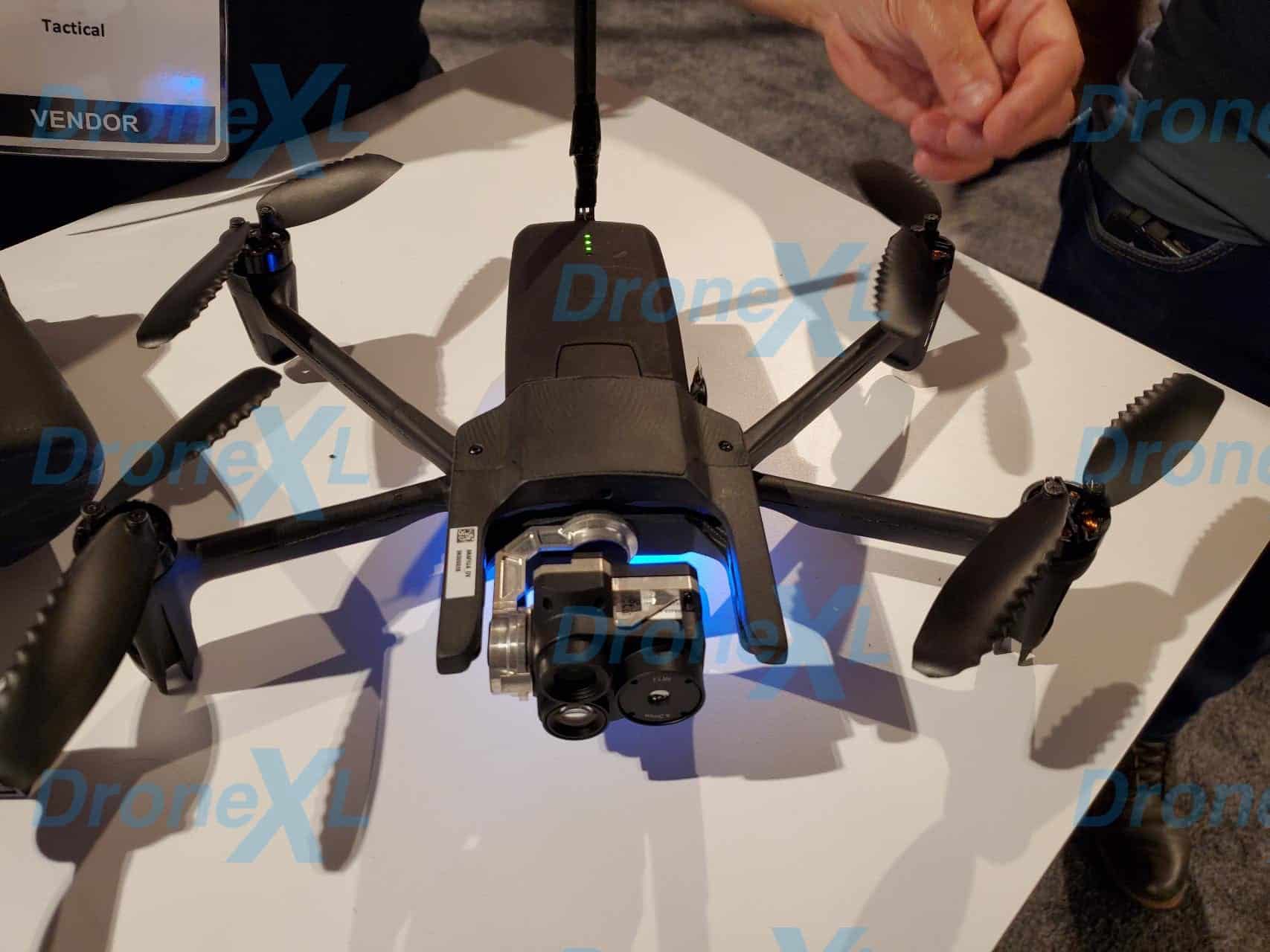 And in this detailed shot of the camera we can clearly see three lenses. We have been told that it provides 32x optical zoom in combination with a FLIR Systems Boson thermal camera with ‘impressive clarity’. 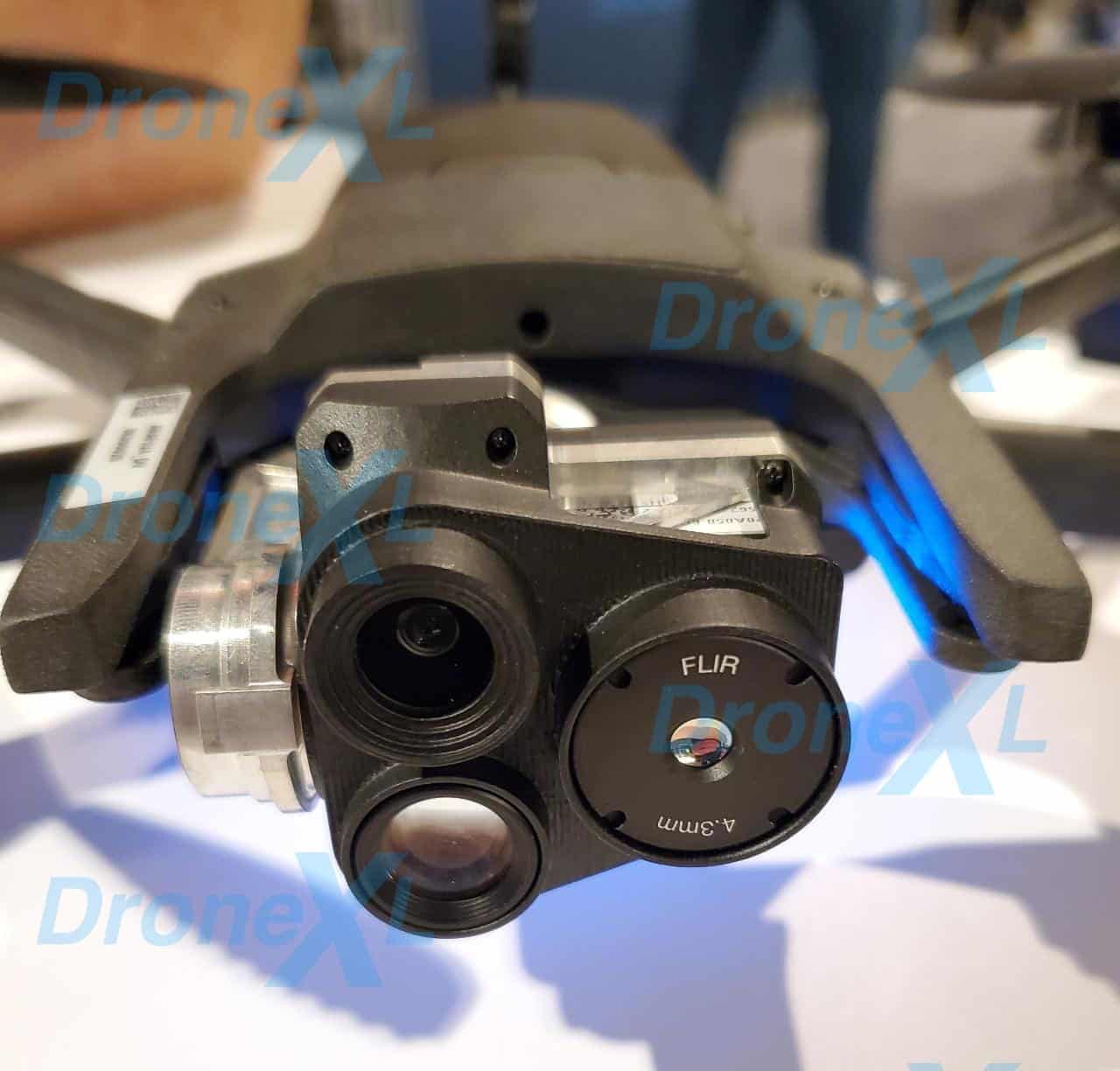 The propellers have a serrated trailing edge which is expected to cut down on prop noise and make the drone more stealthy. The original Parrot Anafi was already a quiet drone and we are curious if the new one makes even less noise. 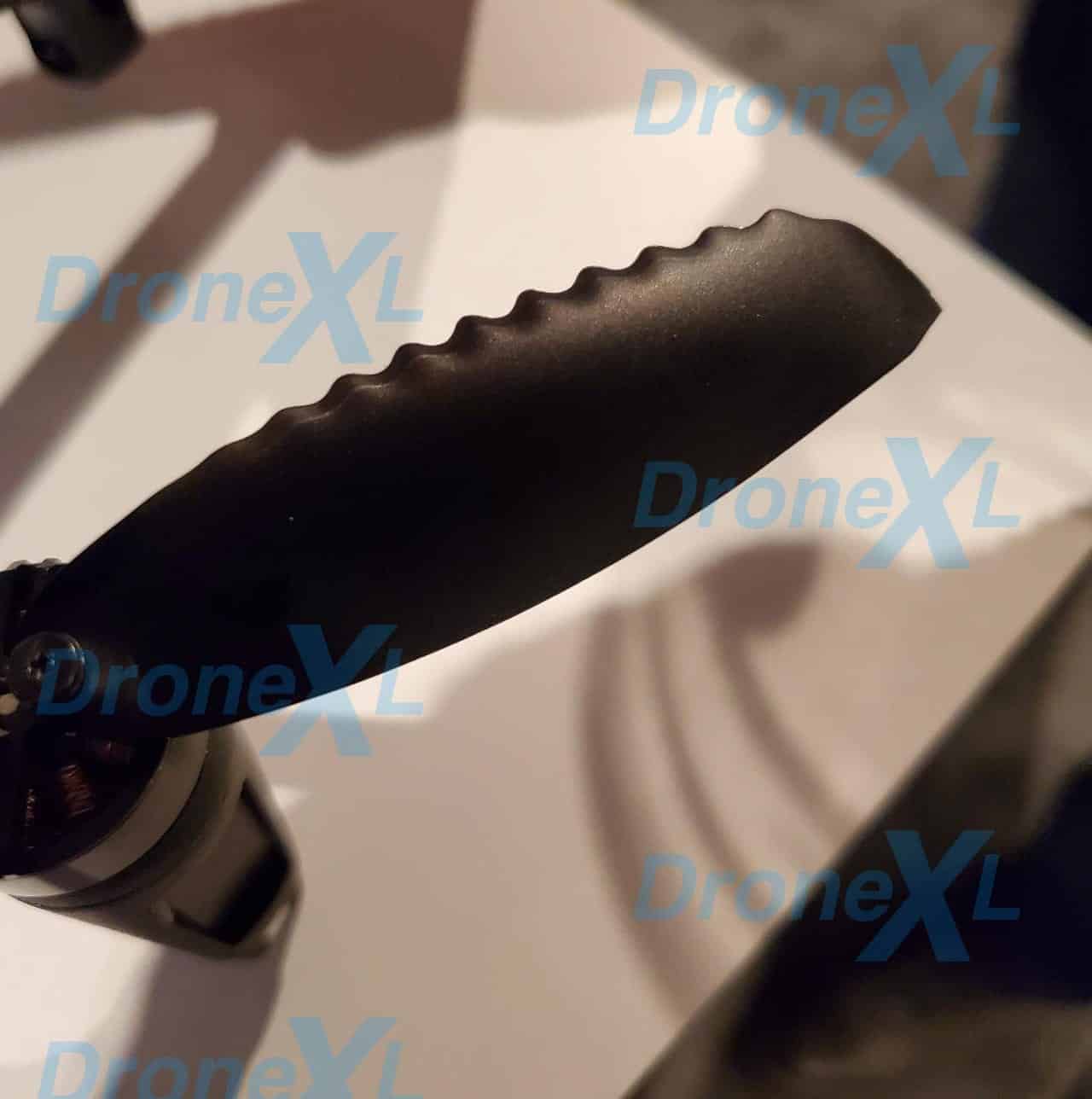 The Parrot Anafi Thermal SE will be built in the U.S.

The new Parrot Anafi Thermal SE outdoor tactical drone apparently is for law enforcement and military purposes only. And, most importantly, will be mass-produced right here in the United States. We have not been able to confirm if the drone will not include any Chinese-made parts.

As many law enforcement and safety agencies are moving towards smaller, lighter, less-expensive, and faster-to-deploy aerial platforms, it is not hard to see why people would get excited about this drone that also offers a 32x zoom thermal camera. 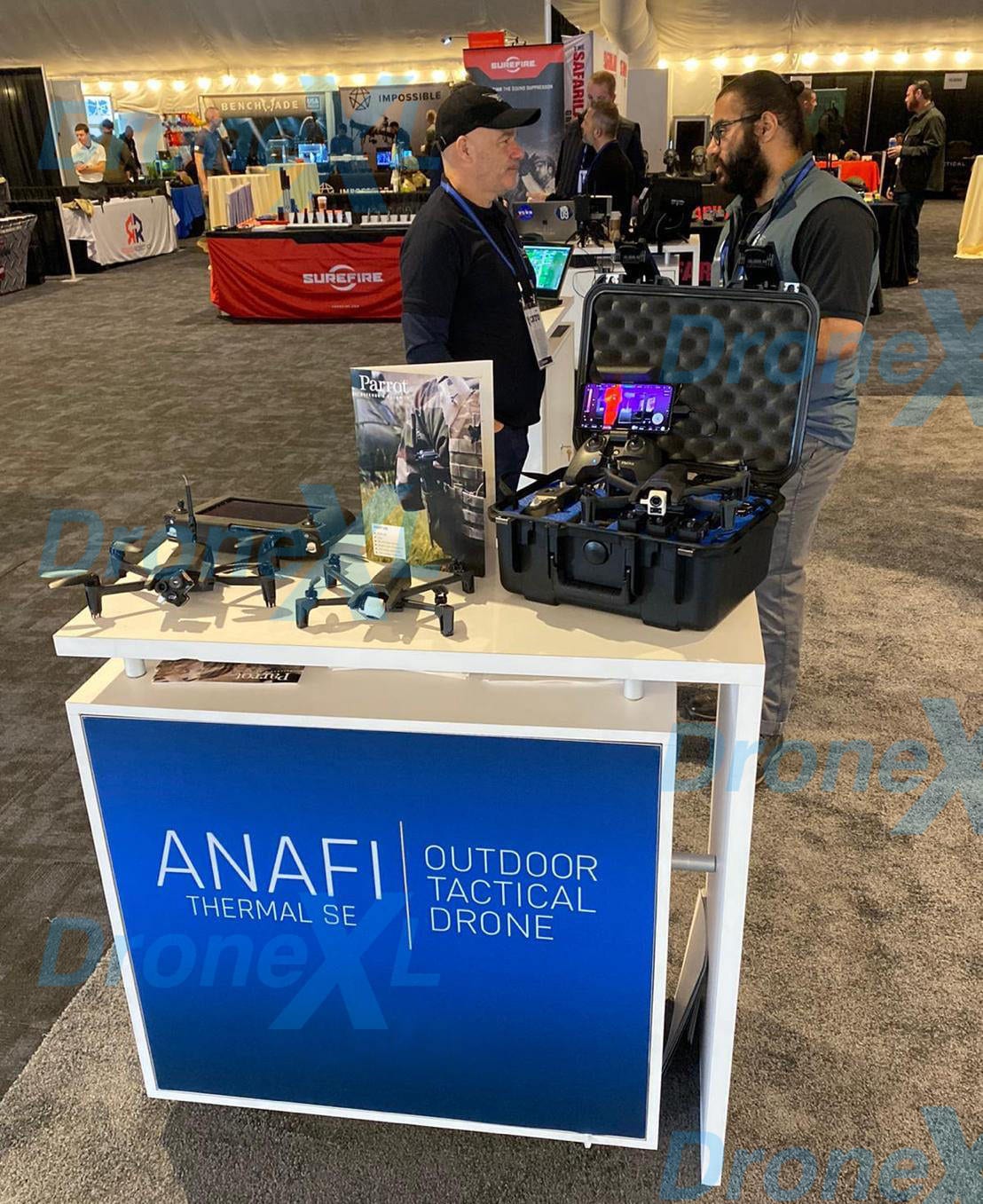 Here’s a closer look at the zoom capabilities of the Parrot Anafi Thermal SE outdoor tactical drone with the 32x zoom thermal camera.

What do you think about the Parrot Anafi Thermal SE outdoor tactical drone? We think it is the perfect drone to use for good. Let us know in the comments below.

A graduation study into indoor flying mini drones that work together to detect a gas leak has earned the Dutch student, who used to study at the Technical University in Delft (Netherlands), Bart Duisterhof the honorable...