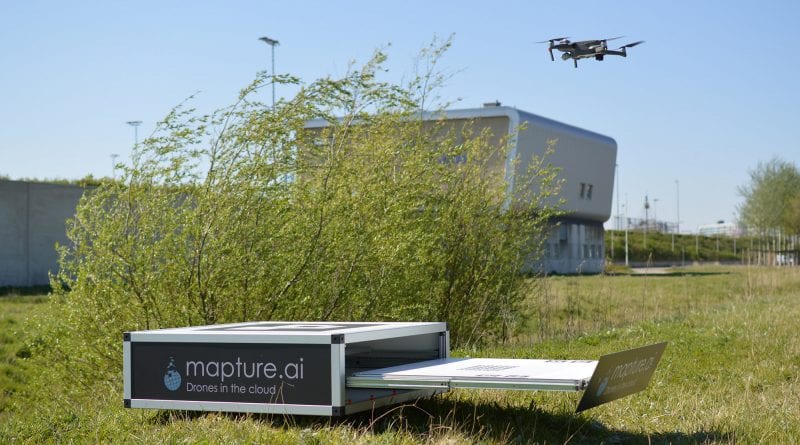 The fire brigade and Rijkswaterstaat, part of the Dutch Ministry of Infrastructure and Water Management, will soon be experimenting for the first time with an automatically operating drone box system. For example, the early detection of forest fires will be examined. Rijkswaterstaat, together with truck parking Rotterdam, will monitor a truck parking at Hazeldonk with the system. What is noteworthy is that drones will start flying around for the first time without the need for a pilot to be present. To make this possible, a special risk analysis had to be drawn up first.

The idea to use drone boxes for inspection purposes arose two years ago. Then innovation manager Aad van den Burg of Rijkswaterstaat came into contact with the Noordwijk start-up Mapture.ai.

Van den Burg: “During a conversation of half an hour, it was clear to me that this system needed to be further developed. Shortly thereafter, in the week between Christmas and New Year, we conducted a number of test flights at Fort 1881 in Hoek van Holland. This was followed by tests at Maasvlakte Plaza, at the Markerwadden, and at NLR in Flevoland.”

The concept of a drone-in-a-box is not new. The idea is that a drone is on standby 24/7 in a closed box, ready to take action. As soon as necessary, the box opens, and the drone automatically carries out a specific mission. This can be a pre-programmed flight or an ad-hoc flight to a specific coordinate. Afterward, the drone will fly back to the box to be recharged there.

The number of applications of a drone box is countless. Think of regularly performing the same inspection flights or security purposes. A drone box is also a godsend to be able to respond quickly to calamities. That is why the fire brigade and Rijkswaterstaat, among others, are very interested in the possibility of using drone boxes to support their tasks.

A condition is that no pilot needs to be present with the drone. Otherwise, the added value is nil. And that is where the crux lies: technically, a lot is possible, but until now, the legislation did not provide for the possibility of having a drone fly around without the involvement of a pilot. In fact, it is a flight out of sight of the operator (BVLOS), where the operator can be literally and figuratively on the other side of the world.

This is changing thanks to a risk analysis specially developed for this purpose. This drone box-specific Pre-defined Risk Assessment (PDRA) is currently for approval by the Human Environment and Transport Inspectorate (ILT) and is expected to be published soon. The PDRA was partly established with the help of the drones expert group, which includes representatives from interest groups, the Ministry of Infrastructure and Water Management, Rijkswaterstaat, and knowledge institutions.

The starting point of the drone box-PDRA is that the drone always remains within a certain virtual boundary (geofence) and is limited in terms of maximum flight height. In principle, someone must always watch the drone, but that can also be an operator located at a distance (for example, in a control room). Within the virtual fence, there must also be the possibility to set a number of no-fly zones, such as roads or buildings. The user can have the drone perform all kinds of missions, whereby the system ensures that the drone stays within the boundaries and avoids the no-fly zones.

For safety reasons, the drone may weigh a maximum of 1 kg according to this PDRA. A higher weight is possible in the long term, but then rather drastic risk-limiting measures must be taken. To gain experience first, it was decided to start with lightweight drones.

One of the applications that will be explored concerns fire prevention above forest areas. This pilot project is run by Mapture.ai. A drone will automatically make a test flight over the site every so often, with the aim of signaling starting fires.

Rijkswaterstaat also has a number of use cases in mind. For example, a pilot project is in the pipeline at a truck parking in Venlo. The drone has to check there every so often whether the existing trucks are parked for too long or incorrectly. The images made by the drone are sent to the traffic control center in real-time. Initially, there will be another drone pilot standing next to the box, but at a good time that is no longer necessary.

Another possible application is to check for illegal degassing by inland vessels. The idea is that drones automatically fly to passing tankers to make recordings of the deck. Open shutters could indicate the illegal discharge of harmful gases. Related to this is the idea of ​​having drones in the air quickly in the event of an oil spill. Both cases are part of the Drone2Go project initiated by Rijkswaterstaat.

According to Mapture.ai co-founder Niels Klink, the saying “the sky is the limit” certainly applies to automatic drone boxes. “I expect a huge amount of applications as soon as the drone box PDRA is approved by the ILT. For example, a whole network of drone boxes in the Rotterdam port area is already being considered. The drones could then be deployed on demand by the police, fire brigade, NVWA, and Rijkswaterstaat.”

As possible applications in the port area, Klink mentions the occasional aerial inspection of quay walls, which are sometimes damaged by stern waves from passing sea-going vessels. Another idea is to check whether the unloading of containers has already started on incoming container ships. This allows faster unloading after arrival, but for safety reasons, it is not allowed.

On a technical level, there is still a lot of development on the drone box. For example, it is being investigated whether it is possible to install a sonar on the box, which can signal approaching helicopters so that the drone can give priority in time.

Klink said: “In the very long term, U-space must ensure that drones and manned air traffic are properly integrated. But until then, we have to come up with something else. Just listening to ADS-B is not enough because not all aircraft are equipped with such a transponder.”

Maptura.ai is also exploring the possibilities of sending data via the wireless network of KPN. First on the 4G network, but in the near future also via 5G. The idea is to give priority to the data traffic of the drone so that the connection is not compromised if there is not enough bandwidth available for all users.

The use of drone boxes also raises new questions when it comes to social acceptance of drones, especially in the field of privacy. A drone that automatically makes around along an industrial estate can sometimes evoke negative reactions from people on the ground. There will be applications where it is impossible to avoid performing a data protection impact assessment (DPIA). It could follow, for example, that data that can be traced back to persons, such as images of faces or license plates, must be automatically blurred.

“But when it comes to a drone that goes into a calamity, I don’t expect that many problems in that area,” says Klink. “In such a situation, people on the ground will understand what that drone is doing. Then the social importance is sufficiently clear, I think.”

This article was made possible in part by Rijkswaterstaat.