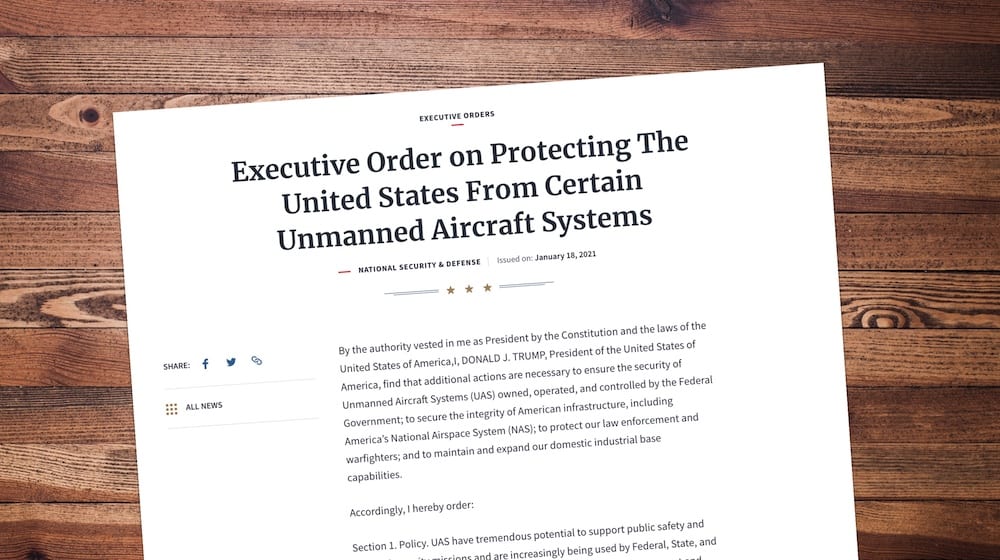 On Monday, President Trump signed an executive order that requires all U.S. agencies to assess the security risks of drones that are made in China, Iran, North Korea, or Russia that are present in any government drone fleet and to prioritize the removal of these unmanned aircraft if warranted.

During his final days in office, President Trump signed an “Executive Order on Protecting The United States From Certain Unmanned Aircraft Systems” that requires a security risk assessment of any Chinese-made drones, as well as any unmanned aircraft from Iran, North Korea, Russia, or any other countries, deemed foreign adversaries and to prioritize removing them if warranted.

The executive order requires agencies to outline “potential steps that could be taken to mitigate these risks, including, if warranted, discontinuing all Federal use of covered UAS and the expeditious removal of UAS from Federal service.”

The executive order does not only apply to drones made in countries that are deemed to be adversaries, but also the components that are used in the unmanned aircraft. This is an interesting and important topic. I’m not aware of any drone that does not include any parts that are made in China. And this is true for all the Blue sUAS as well as far as I know.

The executive order states: “any UAS that contains hardware and software components used for transmitting photographs, videos, location information, flight paths, or any other data collected by the UAS manufactured by an entity domiciled in an adversary country.”

Following the directive of the order, all federal agencies need to submit a report to the Director of National Intelligence and head of the Office of Science and Technology Policy explaining if the drones that they use are manufactured in China, Iran, North Korea or Russia or use components that were developed in these countries. Within 180 days the DNI will provide a document to the president that provides and a security risk assessment of the drone.

So far, the only drones that actually have been vetted and screened are the DJI Government Edition drones. these UAS were developed in partnership with the Department of the Interior. Yes, this is the same department that grounded its entire fleet of 800 drones, including a number of DJI drones.

The Office of Management and Budget will work with the various federal agencies to identify potential funding sources so that any drone that does not fit the requirements can be replaced with Blue sUAS drones that will be significantly more expensive ($21k for a Skydio X2) than other models (DJI M2E Dual for $3.5k) that are currently available.

Will the Biden administration reverse the executive order from President Trump? Possibly, but I wouldn’t hold my breath.

Last month, DJI was added to the economic blacklist or the so-called Entity List, banning any U.S-based company from exporting to DJI and a number of other Chinese firms.

What do you think of President Trump’s executive order that requires a security risk assessment of Chinese-made drones? Let us know in the comments below.