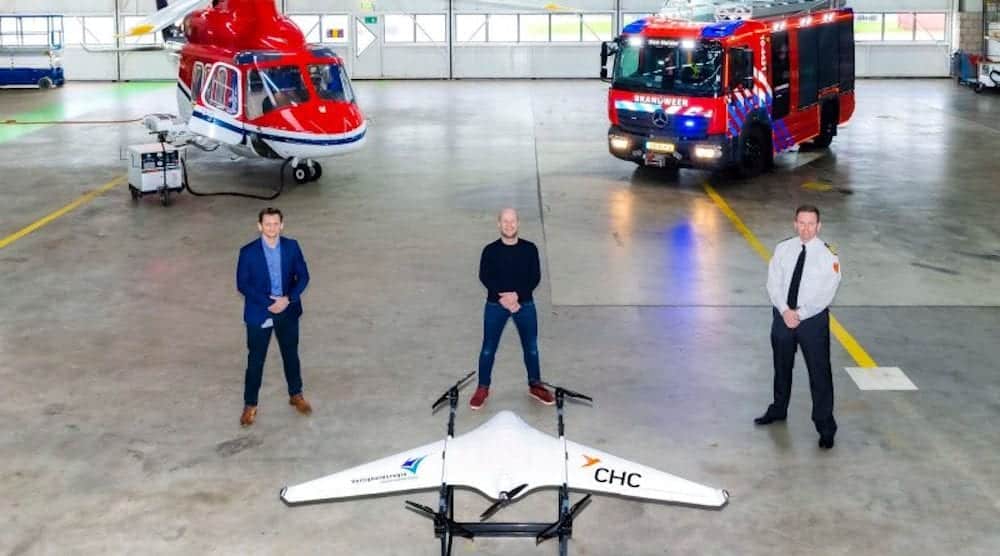 Drone should detect forest and wildfires at an early stage

As a result of rising temperatures and more periods of long drought, the risk of forest and wildfires in The Netherlands will increase sharply in the coming years. In order to identify forest and wildfires at an early stage, the North Holland North Safety Region wants to deploy a drone that periodically flies around during periods of drought. To this end, a partnership has been entered into with drone builder Avy and CHC Helicopters in Den Helder.

Drone should detect forest and wildfires at an early stage

The idea of ​​using drones for early detection arose during a brainstorming session between CHC and the fire brigade.

“We currently operate far fewer flights to offshore platforms. We are therefore looking for other ways to use our knowledge of aviation. While talking the idea arose to investigate the possibilities of using drones for forest fire prevention, ”says Niels van Roon, UAS project lead at CHC.

The idea is to have a drone fly around the dune area of ​​Noord-Holland every day at fixed times, during periods of severe drought. In principle, take-off and landing and flying must be fully automatic. The system could be controlled and monitored from CHC’s operations center. It was decided during a six-month proof of concept project to find out what the possibilities are and where the bottlenecks lie.

For the delivery of the drones and an automated dronebox, they soon ended up with Avy from Amsterdam. This company developed the Aera fixed-wing drone, which can take off and land like a multirotor. The drone is designed to cover longer distances and can be equipped with a thermal imaging camera, which can be used to locate fires.

For Avy there are the necessary technical challenges to the project. Patrique Zaman, director of Avy: “For this project it is important that starting forest fires are detected at an early stage. This means that you want to scan large areas of land per flight. To make this possible, we first have to investigate at what angle the IR camera can best be, and what the most optimal flight height is. We also want to investigate how the data can be processed automatically, so that a firefighter on the ground has immediately usable information. “

There are also the necessary hurdles to overcome in the field of regulations: flying automatically from a dronebox, flying out of sight of the operator (BVLOS), flying above Natura 2000 areas: all things that are in principle possible under the new EASA legislation, but for which the necessary arrangements still have to be made at the national level.

But the mere fact that in principle only flies above nature reserves also brings opportunities.

“Manned aviation must fly at least 500 feet (about 150 meters) high above Natura 2000. The drone certainly flies lower. As a result, you have by definition less risk of conflict, ”says Van Roon. “In addition, our drones are equipped with an ADS-B transponder. And we are working on an integration with the Altitude Angel UTM system ”, Zaman adds.

The trial period is likely to start on April 1.

“We are going to see whether it is indeed technically possible to perform flights above the intended area. First on location, then from our operations center. During the proof of concept period, CHC wants to gain knowledge and experience with regard to the use of drones. Other safety regions have also indicated that they are interested. They follow the project in which data is also shared, ”says Van Roon.

For Avy, the pilot project will be a success if more experience is gained with automatic take-off and landing from a dronebox, and with performing remote operations. Knowledge of the automatic processing of data is also high on Zaman’s wish list.

The main goal is to prevent forest fires in the future. Zaman: “The chance of forest fires is just increasing. So it would be nice if the moment of intervention could be brought forward. Nowadays, it is often the case that everything has already escalated by the time of detection.”