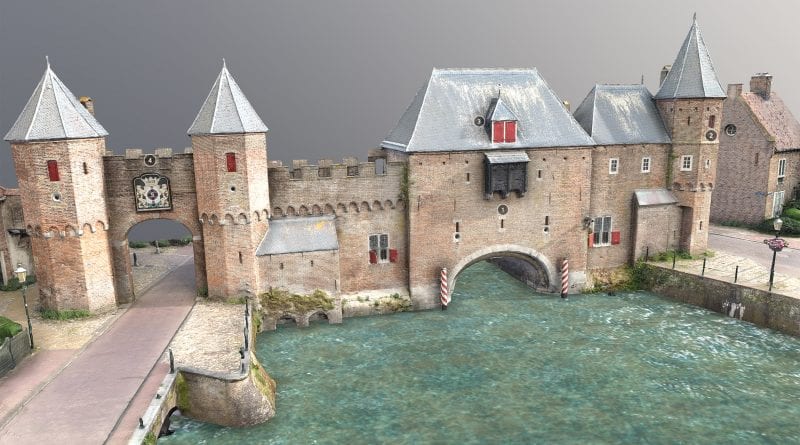 The historic Koppelpoort in Amersfoort (The Netherlands) can now also be admired virtually in three dimensions thanks to the efforts of Dutch drone pilot and VR developer Sjoerd Renkers. Using a DJI Mini 2, he took hundreds of photos of the historic city gate. These were converted into a photo-realistic 3D model by means of photogrammetry. DroneXL asked Sjoerd about the background to this project.

Who are you and what do you do in daily life? Have you been involved with drones for a long time, and in what way?

“I am an E-learning and educational Virtual Reality developer. A few years ago I flew with a borrowed Phantom 2 and Phantom 3 drones. I did this for fun and to film luxury lodges in southern Africa. Shortly after the DJI Mini 2 came on the market and the new favorable European rules for this drone came into effect, I decided to purchase this drone. I mainly use the drone as a hobby for video and photogrammetry and professionally for panoramic photos. I process the panoramic photos in 360° guided tours.”

How did you come up with the idea to get started with photogrammetry, in combination with drones?

“I had been working with Sketchfab for several years, on which I publish 3D models professionally. I use 3D models to integrate in E-learning, for VR, and for AR, among other things. I had shot some videos with the drone and wondered what I could do with it now. Then the relationship with Sketchfab through photogrammetry was quickly established.”

Why did you choose the Koppelpoort as a subject? What were the specific challenges at this location?

“I had three reasons to scan the Koppelpoort. The Koppelpoort is one of the most iconic and beautiful buildings in Amersfoort, the gate is almost completely free so that it can be scanned from all sides and I live in Amersfoort. Challenges when scanning the Koppelpoort were that it was sometimes difficult to keep the drone in sight all the time, I had to partly fly above the water, which I find exciting and the amount of public that can often be found around it. I solved the latter by flying just before a football match of the Dutch national team. There were few people on the street. And it was cloudy, which is important for photogrammetry to get an even exposure.”

Watch an animation of the 3D model:

Can you tell us something about the development of the Koppelpoort model? How and with what did you make the flights, with what settings, how many photos were taken?

“I photographed the Koppelpoort up close and from afar, taking 950 photos. I use the time-lapse function where the drone takes a picture every 2 seconds. It is difficult that a preview is shown every time after a photo is taken. At that point, I don’t see what the drone sees. For photogrammetry, I choose a somewhat faster shutter speed of at least 1/100 because otherwise there is a risk of motion blur. The drone moves sideways during time-lapse shooting.”

How did the post-processing in RealityCapture work?

“After loading the 950 photos, I had RealityCapture construct a 3D model. This 3D model had 40 million polygons. To make the model work smoothly on Sketchfab, I reduced this number to a million polygons.”

What opportunities do you foresee from your role as an Educational Consultant in the field of technology-assisted learning / Developer of virtual reality?

“Photogrammetry is still a new phenomenon for me. I’ve only scanned four objects and posted them at Sketchfab. I don’t know yet whether I will use photogrammetry professionally. A disadvantage of 3D models based on photogrammetry is that they are geometrically complex in shape. This means that they load slowly on simple smartphones and on VR glasses.”