In this review of the DJI Air 2S, cinematographer Philip Bloom wonders if this drone is the one. It is the best drone DJI makes Philip says in the video, but is it the best flying camera? Let’s find out in this 25-minute video review of the latest DJI drone.

Is the DJI Air 2S THE ONE flying camera for Philip Bloom?

The DJI Air 2S is the best drone DJI makes but is it also the best flying camera? That is the focus of Philip Bloom’s video review of DJI’s latest drone.

Philip said the following about his review of the DJI Air 2S:

“I hope you enjoy this video, I am very proud of it. A lot of time, effort and planning went into it. I know there are over 10,000 reviews on YouTube already about it but I hope you can watch just one more, it’s unlike any other review out there 🙂

This review is about my hope that DJI will bring out the drone that ticks all the boxes…the boxes aren’t even that many. The Mavic 2 Pro ticks many but is missing key things, so does the Air 2S deliver what I am missing?”

The DJI Air 2S flies for about 31 minutes, which is slightly less than the DJI Mavic Air 2 but on par with the bigger and more expensive DJI Mavic 2 Pro.

The biggest shortcomings of the Air 2S versus the Mavic 2 Pro are the fact that the Air 2S doesn’t have side obstacle avoidance sensors, no variable aperture, and albeit less importantly, no Hasselblad color profile.

The DJI Air 2S comes with O3 or OcyuSync 3.0 which not only provides an increased range but also a much more reliable video transmission. The new DJI drone comes with DJI’s AirSense technology installed, better known as ADS-B In to warn you of nearby manned aircraft.

Philip says in his review:

“Sadly it doesn’t have the variable aperture of the DJ Mavic 2 Pro camera. It is fixed at f/2.8. Being able to adjust your exposure in flight without having to change your shutter speed or ISO is the biggest advantage of the Mavic 2 Pro camera over this one.”

The DJI Air 2S looks night and day better in a full field-of-view at 4K compared to the Mavic 2 Pro.

The biggest advantage that the DJI Air 2S has is the wider field-of-view of 22.4 mm. For comparison, Philip says that the Mavic 2 Pro in HQ mode provides better video quality but in order to do so it crops the image so that you’re effectively shooting with a 40 mm lens. This also means that you’re not really using the 1-inch sensor anymore.

No other DJI ‘Mavic’ drone provides as wide a field-of-view at up to 5.4k video as the DJI Air 2S up to 30 fps that is. It does crop slightly at higher frame rates.

Having a wider angle lens allows you to get wider shots when you’re flying at the maximum allowed altitude of 400 feet, Philip points out.

Philip was positively surprised by the video quality of the DJI Air 2S. It looks more natural and less video-like.

Unlike the Mavic 2 Pro drone, the Air 2S does not let you change the sharpness, saturation, and contrast in the drone. You have to work within the three picture profiles. 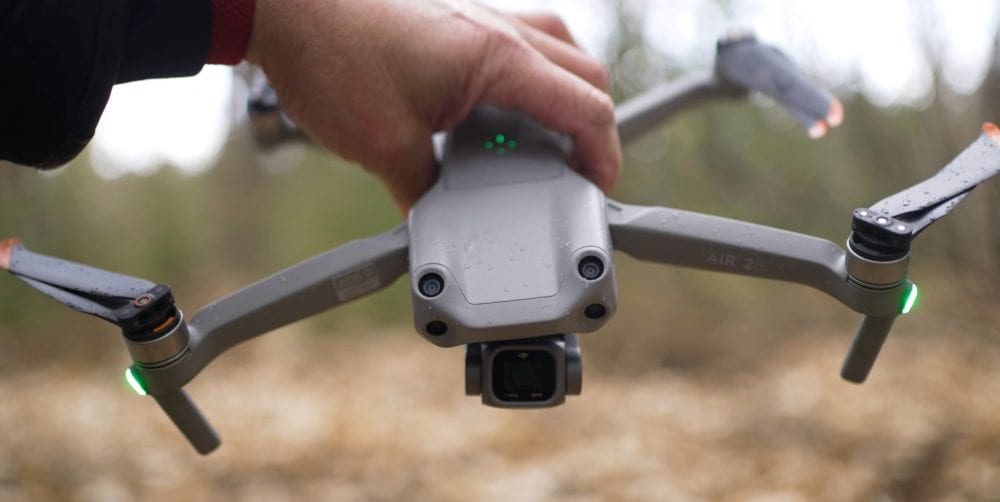 Cinesmooth on the Air 2S is too fast for cinematic shots

The Cinesmooth mode is not the same as the old Tripod mode as the drone now flies 5x faster in Cinesmooth mode. This is really unfortunate. Maybe a Firmware Update will fix this or will this be exclusive for the Mavic 3?

Philip recommends buying the Air 2S over the Mavic Air 2 but is more cautious to recommend it over the Mavic 2 Pro. That really depends on what is important to you (field-of-view, variable aperture, side sensors). It would be really nice if DJI would bring out the DJI Mavic 3 with interchangeable lenses, Philip says. He is holding out for the Mavic 3, as am I.

Be sure to watch the entire video if you’re interested in the crop rates, sharpness, frame rates, and more.

DJI drones, including the DJI Air 2S, Mavic 2 and Mini used by Russian military for training

DJI Mavic 3 Classic photo leaked ahead of release date. Is this the best camera drone of 2022?