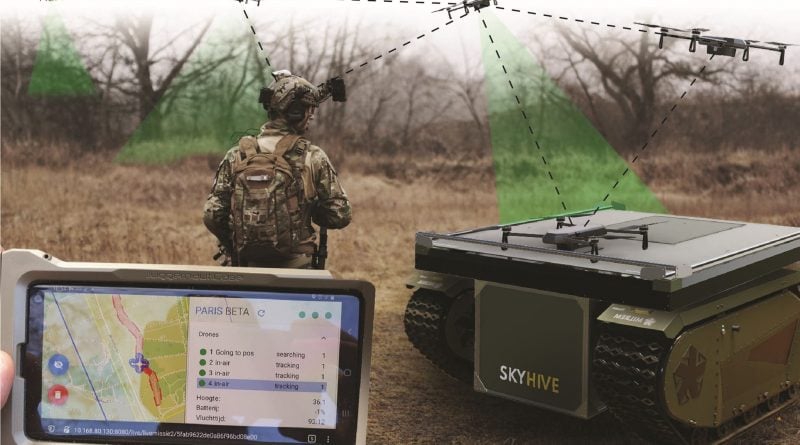 The Dutch drone makers Delft Dynamics and Tective Robotics, in collaboration with TNO and Avalor AI, will develop an autonomous drone swarm that can be used by military personnel to collect tactical intelligence. The idea is that one operator can launch several drones, which then perform a task independently and in cooperation with each other.

The project consists of several parts. For example, an algorithm will be developed that can control an autonomous drone swarm. There will also be algorithms based on machine learning to recognize and classify targets. When it comes to the drones, they will be able to perform battery changes independently through mobile launch & recovery platforms.

The spearhead of the SPEAR project concerns the integration of all these subsystems so that an independently functioning multifunctional drone swarm is created. Numerous projects within and outside the Dutch Department of Defense will be used for this purpose. The ultimate goal is to be able to offer more ISTAR capacity with less manpower.

Delft Dynamics and Tective Robotics are responsible for the development of all drone-related hardware, as well as the mobile docking stations. The mobile SkyHive system from Tective Robotics is used as the basis for the drone box, which can support up to five drones. With this system, the Delft startup won the Defense Innovation Competition in 2019. Avalor AI and TNO are involved in the development of the smart algorithms.

Autonomous military drones on the rise

Worldwide, developments are picking up speed when it comes to autonomously operating drones for military purposes. There are even armed unmanned systems in use that can independently detect and take out targets from the air. Worldwide opposition to such autonomous systems is growing. In the case of the Dutch SPEAR project, there is no question of armed drones.

Arnout de Jong (director of Delft Dynamics) emphasizes that the system can also be used for search & rescue operations outside the Department of Defense. “Think of the current flooding in Limburg or the search for a missing person or drowning person.”